WATCH: Rare footage of Mars’ crater which can be a source of water 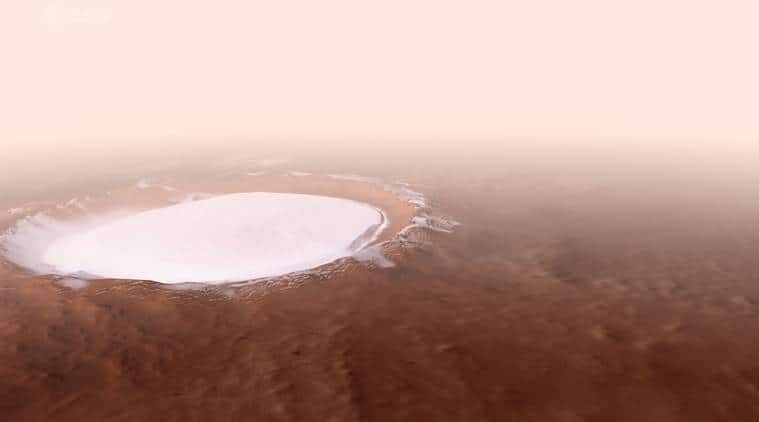 There is always a fascination when it comes to exploring other planets in our solar system. People are always eager when a new video or photo from space surfaces on the internet. A video from the European Space Agency (ESA) that was posted on Youtube on June 30 has been making rounds. The video shows a distinctive view of the icy Martian canyon known as the Korolev crater.

The scientists believe that the crater is likely to be a source of water on Mars and will be beneficial for future human colonists. However, the view available in the video is not a recorded one. It was created from combined scans of the surface of the planet.

The typographical data used in the video was gathered from Mars’ Express probe’s onboard high-resolution stereo camera. The images of the unique crater are a combination of images sent by Red Planet which was launched under ESA’s Mars Express Mission in 2003.

The Korolev crater in the video is located in the northern lowlands of Mars and is 82 km wide. The ice visible in the crater is filled all year round. Another fascinating fact about the crater is that it is one mile deep.

The crater was named after in honour of chief Soviet rocket engineer Sergei Pavlovich Korolev, also known as the father of Russian space technology.

The aim of the released footage was to develop people’s interest to travel to the Red Planet. SpaceX CEO Elon Musk wishes to colonise Mars with his Space Rocket’s company Starship after the successful launch of two astronauts to the International Space Station.

Earlier in the month, an image of Mars’ biggest and closest moon Phobos was captured by ISRO’s Mars Orbiter’ onboard Mars Colour Camera (MCC). The image was taken 7,200 km from Mars and 4,200 km from Phobos.