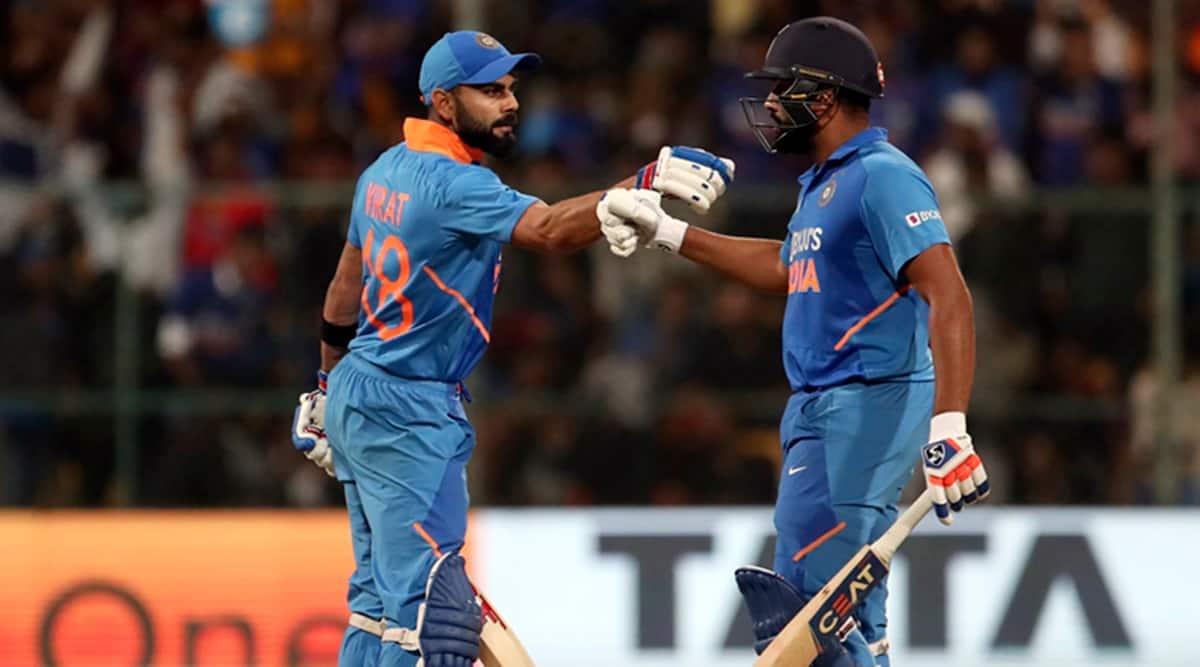 In this file photo, India’s Rohit Sharma, right, celebrates with captain Virat Kohli after hitting a boundary during the third one-day international cricket match between India and Australia in Bangalore, Jan. 19, 2020. (AP)

India skipper Virat Kohli and his deputy Rohit Sharma continued to dominate the ICC ODI rankings for batsmen by occupying the top two positions, while pacer Jasprit Bumrah remained static at the second spot in the bowler’s list.

Kohli (871) and Rohit (855), who have not featured in any one-day game since the COVID-19 pandemic suspended all cricket activities across the globe, are ranked one and two respectively in the batting chart.

Pakistan captain Babar Azam, however, has bridged the gap with the Indian pair after amassing 221 runs, which included a knock of 125 in the third match against Zimbabwe recently. He gained eight points but remained at the third spot.

For Zimbabwe, Brendan Taylor and Sean Williams have advanced after slamming fine centuries in the series.

Taylor has progressed nine slots to 42nd position after scoring 204 runs, including a knock of 112 in the first match, while Williams has advanced 12 places to 46th position with 197 runs, including an unbeaten 118 in the final match.

In the bowling chart, New Zealand pacer Trent Boult (722) held on to his top spot, followed by Bumrah (719).

Pakistan fast bowler Shaheen Afridi has achieved a career-best 16th position after a notable performance in the series against Zimbabwe, which they won 2-1.

Shaheen, who shot into international prominence in the Under-19 World Cup in 2018 in New Zealand, has gained eight places to move into the top 20 for the first time in his career with a match-winning haul of 5/49 in the opening ODI of the series.

Wahab Riaz, also a left-arm fast bowler like Shaheen, moved up six places to 60th position, grabbing five wickets in two matches, including a haul of 4/41 in the second match of the series.

Zimbabwe’s Sikandar Raza has moved up to 66th place and Donald Tiripano to 90th.

Meanwhile, Zimbabwe’s Super Over win in the final ODI has helped them gain 10 points while Pakistan got 20 points, remaining ahead of Australia on net run rate.

England lead with 30 points after playing two series of the Super League, introduced to bring context to ODI cricket and to decide the seven direct qualifiers for the 2023 World Cup along with hosts India.