Uttarakhand disaster: Raging water destroyed everything that came in its way

The first time Rudra Devi Rana, 60, heard of a drone was on Wednesday. The machine, she was told, “can fly and take photos”, so she hopes it can do a little extra and find her son Ranajit, an assistant welder at the Rishi Ganga hydel power project site who has been missing since the flash flood of Sunday. “There is a cave nearby, maybe Ranajit ran into it. Can you send the drone there? Can you please check?” she pleads with a team engaged by the State Disaster Response Force.

But the team had no information for her when they returned.

The floods, which experts believe could have been triggered by a large chunk of snow slipping from a hanging glacier, first hit the Rishi Ganga power project at Raini village, followed by NTPC’s Tapovan-Vishnugad plant, 8 kilometres downstream.

It’s these 8 km that frame the latest disaster to have struck the ecologically sensitive region, one where dams, rivers and humans have for long shared a complicated relationship.

While at least 70 people at Raini are believed to have been buried or washed away in the sludge that the floods carried, at the Tapovan site, around 35 are stuck in a tunnel that has been choked by the sludge. Many others are feared stuck in the sludge that has now covered the area around the barrage at Tapovan. So far, 38 bodies have been recovered, with 166 people still missing.

With rescue operations focused on those stuck in the Tapovan tunnel, along the 8-kilometre stretch between the two power project sites, families of those missing have now set out on their own to look for their loved ones.

Of the four power plants that were damaged in the floods, the privately owned Rishi Ganga project was the smallest, with a generation capacity of 13.3 MW. It was the first point where the deluge met man-made resistance.

Traditional wisdom had ensured that all houses along the Rishi Ganga and Dhauliganga rivers — including Raini, a village of 45 habitations — were constructed at a height. All survived the flood. 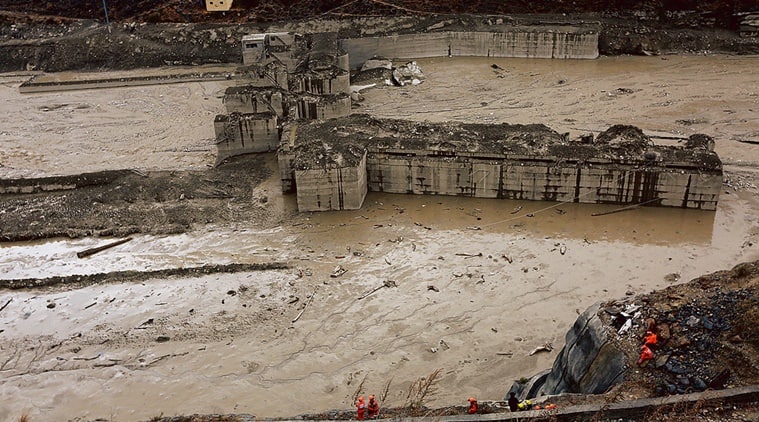 In the Valley below are the structures and buildings built around the power plant. Most of these structures, except for a few tin sheds that fell in the shadow of a cliff, have been either washed away or are covered in several metres of quicksand-like sludge.

Access to what was once the power project — the 30-metre-deep pumping station, a guest house and residential quarters, and a

D-tank — have remained cut off since Sunday.

The only way to get a glimpse of the path that the floods took before engulfing the power project is to hit a muddy trail that starts from Raini village. The winding path goes on for around three kilometres, before it ends abruptly — seemingly swallowed by the raging water.

On Thursday, The Sunday Express met Assistant Professor Prashant Vangala and his team of researchers from IIT-Delhi on this trail. They have been doing a reconnaissance study since Wednesday to understand how loss of lives can be mitigated in situations such as the recent flash floods.

Like with every disaster, this one too has left behind crucial lessons in its wake, says Vangala.

“We are part of the Geotechnical Extreme Events Reconnaissance (GEER) Association. We will study these floods, prepare a report in a week or two and suggest ways to reduce loss of lives in such a situation. An early warning system, for instance, would certainly have helped. Building workers’ tin sheds so close to the river was also problematic. Luckily, they were saved by a cliff face,” he says.

He says that as the deluge barrelled down the mountains, the water and mud reached heights of around 200 metres at some points, wiping out trees on both sides of the mountain.

With the Border Road Organisation (BRO) focused on rebuilding a crucial bridge around 50 metres from the main entrance to Raini village — one that connected the area to 13 villages beyond which lies (Tibet) China — the local administration has only just started to clear the sludge that covers every low-lying surface in the village.

Workers and contractors, on whose assurances migrant labourers from as far as Bihar, Uttar Pradesh and Himachal Pradesh came to work at the Rishi Ganga project, accuse the Kundan Group, which owns the hydel project, and the local administration, of not putting safety systems in place.

“There are four power projects between Raini village and Vishnuprayag and all have been impacted. In an area as vulnerable as this, shouldn’t there have been a warning system? That way, if a disaster hits the first power plant, the others can be warned. Many more people at the Tapovan plant could have been saved. How can there be such laxity about people’s lives?” asks Ankit Kumar, 30, who works in Haridwar and is also a labour contractor.

His younger brother, Vickey Kumar, 26, a maintenance engineer, had come to the Rishi Ganga project on work on February 3. His work was to have lasted a week or two, after which Ankit was to have arrived to take Vickey and two others back to Haridwar.

“And here I am today, not even being able to find their bodies. What will I tell their families, my family?” he sobbed.

Rajesh Bhandari, a contractor who had sent five workers from Himachal Pradesh to the Rishi Ganga project for maintenance work at the 30-metre-deep pumping room, accuses senior officers of the Kundan Group of not informing families of the workers who died.

“The family members… everyone you see here… drove for 20-24 hours to get here as soon as they saw the news on TV. The owners did not make a single call. Also, no one from the local administration even asked about us for the first three days… All energies are focussed on the tunnel at Tapovan, but the biggest tragedy is unfolding here. No one cares,” he said.

S D Kamat, CEO of the Kundan Group, however, denied the allegations. “It is not true that we did not contact families. I was in Chamoli for the past three days and have personally spoken to many family members. It is a very difficult situation for everyone. Access to the plant is completely blocked. We will help everyone the best we can,” he said.

Chamoli District Magistrate Swati Bhadouriya, meanwhile, said they had brought in excavators at the Raini site on Wednesday (three days after the incident) and had sought the help of the BRO to clear the sludge. “I go to the site every day. We are helping people in whatever way we can. I have met many families and they are our priority. We are also conducting search operations based on what the families are telling us,” she said.

Project manager Kamal Chauhan, who had a narrow escape on February 7, is among those fielding questions from anxious family members and contractors looking for missing workers.

“Since maintenance work was underway at the pumping station, there were people from across the country who had been engaged for a few days. When the flood struck, I was at the gate and managed to run,” says Chauhan, 38.

Just ahead of the power project, the Rishi Ganga river meets Dhauliganga.

Subahi and Jogwar villages, on either side of the Dhauliganga river, stand facing each other. With the bridge across the river washed away, Jogwar is among the 13 villages that remain cut off.

On Thursday, Virender Singh, 32, a taxi driver in Subhai, says seven people from Jogwar had set out in a group to look for the body of a man who had taken his goats out grazing when the flood hit.

“So far, we have not got help in looking for bodies so villagers have taken it upon themselves. They tie ropes around their waists and venture into the sludge to see if they can find bodies. My uncle is part of the search party,” says Singh, watching the operation from the main road.

In the 8-kilometre stretch between Raini and Tapovan are at least five points where construction was on before the flash flood struck, include a two-lane iron bridge.

These are mostly sites for a road-widening project undertaken by the BRO. At two of these sites are signboards warning of loose boulders; elsewhere, near a hot spring, there is a notice from the Forest Department, asking people to not boil eggs and drink alcohol near the site, since it is part of the protected Nanda Devi Biosphere Reserve.

“On an average, one person from every three-four houses in the villages around the area works at the Tapovan project, or has done so at some point. If you have to live here, you can either drive a taxi, work at the plant, or run a home stay. There are no other jobs here,” says Virender Singh, who has been driving a taxi for 14 years.

But it wasn’t always this way, say locals.

Rukma Devi, 58, from Subahi village, say she has grown up hearing stories from her grandparents of trade with Tibet.
“My dadi would tell us stories of how dada walked to Tibet, carrying Himalayan salt and rock sugar, and would come back with knives and woollens. The road, of course, was much narrower then. They would trade animals too,” she says.

According to senior BRO officials, the road widening is a strategic project.

“The border with China is just 120 km from here and troops move here regularly. Not only that, these villages are remote and need good roads,” said an official, who did not want to be named.

Channu Singh from Subahi, however, says that while he is happy about the road project, he is worried about the rate at which boulders have been rolling off the cliff tops these days.

“Roads are important. This one is a life saver for us, but the rate at which the mountains are being cut is worrying. The number of landslides have gone up,” says the 65 year-old.

Water and debris from the Rishi Ganga plant and the bridge that was washed away travelled at high speeds before hitting the 520 MW Tapovan-Vishnugad plant, which is under construction. Unlike at Rishi Ganga, locals — from areas such as Joshimath, Gopeshwar, Peepalkoti, Karnaprayag — formed the bulk of the workforce at Tapovan.

Since Sunday, relatives of those stuck inside the tunnel at the project site have been turning up every day, hoping to hear some news.

“Now, it doesn’t matter what the news is, we have lost any hope of seeing them alive. But at least give us the bodies. If nothing else, it will give us some closure,” says Dinesh Chandra, whose son-in-law Satyeshwar Prasad Purohit was working on the pumping set when the waters came.

Back at Raini, on Thursday, a day after the drone flew back with no news of her son Ranajit, Rudra Devi, her elder son Dev Rana, and a few others from the village set out on a narrow path in the mountains, after somebody reported “something that looks like a body”.

Rudra Devi asks The Sunday Express to click a photograph of what she suspects might be a body, and asks us to zoom in. Peering into the camera’s display screen at a mass of slush, she asks her elder son Dev Rana, “Could this be him? Do you know how we can go get him?”