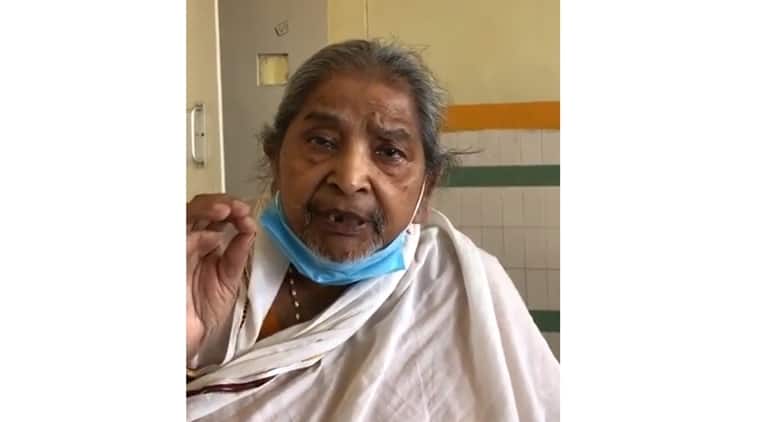 P Vijayalakshmi was psychologically devastated at the time of her admittance in mid-June. (Express Photo)

A 94-year-old woman walked out of Gandhi hospital after recovering from COVID-19, making her the oldest patient in the state to successfully fight the disease. Though P Vijayalakshmi, from Chikkadpally in Hyderabad, was admitted with mild symptoms, doctors at Gandhi General Hospital, the state’s nodal COVID-19 treatment center, say that she was psychologically devastated at the time.

Her recovery, they say, is a fine example of how important mental strength is in overcoming the disease. Vijayalakshmi was admitted into the hospital on June 17 after she tested positive. Her younger son had succumbed to the disease and daughter-in-law, who had undergone renal transplantation and was in immunosuppressive therapy, also tested positive for the viral infection. She was discharged from the hospital on Monday.

“She was quite depressed. We would counsel her and show her video messages twice a day from his older son and family who live in the USA. This helped boost her morale and that’s why she could come out successfully,” Dr. Bhumesh Kumar Kadakam, associate professor at Gandhi hospital, told indianexpress.com. The daughter-in-law is also stable and under home isolation.

In a video shared by Gandhi hospital doctors, Vijayalakshmi could be seen expressing satisfaction over the treatment she has received in the hospital. Though older persons might be at greater risk in case of comorbidities, doctors reiterate that sound mental health is as important as medication.

With 1,879 new cases, the total number of confirmed COVID-19 cases in Telangana rose to 27,612 on Tuesday. Of them, 11,012 are active and under treatment. 313 persons have succumbed to the disease to date. The state government, which has consistently faced criticism for low testing, has to date tested 1,28,438 samples, according to a medical bulletin.

The office of the director of Public Health and Family Welfare, sharing the details of bed occupancy in government hospitals, said that a total of 92.2 per cent beds are lying vacant as of date.

The department has also appealed those “with moderate to severe symptoms, with COVID positive report, should go to Gandhi Hospital where the Government has made elaborate arrangements for treatment and management. Patients with symptoms but not yet confirmed and requiring COVID-19 testing should go to District Hospital-King Koti, Fever Hospital and Chest Hospital.” It further claimed that sufficient beds are available in Government hospitals and based on the clinical requirements, beds will be provided and treatment will be given free of cost in Government hospitals.

Discussed with Private Hospitals on the need to provide cost effective best care transparently to benefit the middle class & poor amidst pandemic stress My appeal not as First Citizen but as one among the common citizens.Public concerns on bills,bed availability& Testing delays pic.twitter.com/9DF3sBic1R

Pulmonologists who attended the virtual meeting warned of a drastic increase in the number of cases in the coming months and said hospitals with thousands of beds should be made ready by the government.

Stating that hospitals should maintain transparency at every level to win overconfidence of the patients, the governor said that the patients and attendants need to be explained about price policy, estimates, possible extra costs due to various co-morbid conditions, etc in advance and that no one should be denied treatment. Hospitals need to come up with moderate charges and economy packages for making the treatment affordable, she said.

Soundararajan has also advised the hospitals as well as the state government to come up with a Plasma Bank to offer plasma therapy for certain critical cases. One of her key suggestions to the government was to start rapid antigen testing where results can be known in half-an-hour. It should be immediately organized by the government, as some states have started the Antigen testing, she said in a statement issued to the media.

The government should take concrete steps to flatten the curve by increasing the number of tests and tracing contacts on a war footing, she added.

Asking private hospitals to avoid any delay in generating test reports that may further delay commencement of treatment, the governor called for expediting the generation of testing reports, improving testing facilities, and ensuring affordable treatment to the patients. “Hospitals need to offer video consultation and counseling, as well as telemedicine facilities round the clock to the patients in home quarantine,” she said. Since medicines like Remdesivir are expensive, she asked the state government to look for means to procure such medicines at a concessional rate.