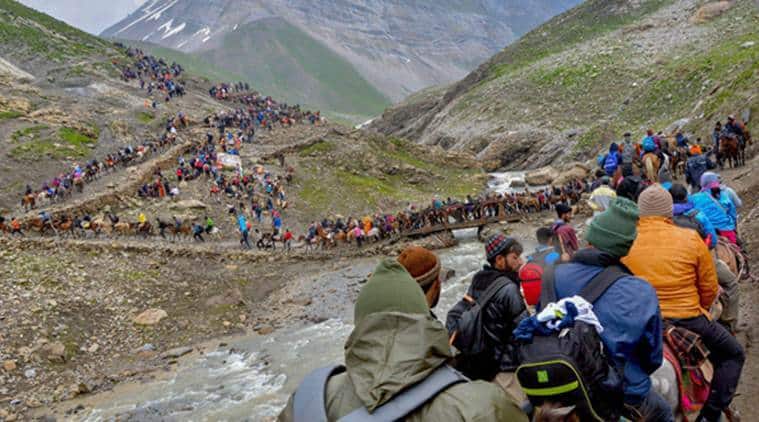 The court said it is for the administration to decide, keeping in view the relevant factors. (File)

Citing separation of powers, the Supreme Court on Monday declined to entertain a plea seeking its intervention to restrain public participation in this year’s Amarnath Yatra in view of the Covid-19 situation. The court said it is for the administration to decide, keeping in view the relevant factors.

A bench of Justices D Y Chandrachud, Indu Malhotra and K M Joseph said in the present case, “the recourse which has been taken to the jurisdiction under Article 32 of the Constitution is inappropriate”.

The court said: “The issue as to whether the Amarnath Yatra should or should not be held is a matter left to the competence of the local administration. Any decision that is arrived at has to be based on law and on relevant statutory provisions holding the field. Entertaining a writ petition under Article 32 at this stage would necessarily involve this court taking over an executive function of oversight over the local administration. We decline to exercise the jurisdiction under Article 32 to take over these powers under the rubric of judicial review.”

The bench said, “The principle of separation of powers requires that administrative decisions must be taken where they are entrusted, namely by the executive arm of the state. The court will step in where the parameters for judicial review…arise. The petitioners are at liberty to provide such inputs, as they may be advised to furnish having regard to their experience of assisting in the pilgrimage in the past.”

It said that the “decision as to whether a pilgrimage should be permitted and, if it is permitted, the safeguards which should be observed, are matters which fall within the domain of the executive arm of the State. In arriving at a decision, the administrative authorities must bear in mind statutory provisions governing the field and policies and administrative circulars issued in pursuance of statutory provisions. An assessment of the situation will be based on ground realities. This assessment lies in the domain of the administrative functions of the state”,

“The duty of the court,” the bench said, “is to step in where (i) the decision-making process is flawed by a failure to observe statutory or constitutional requirements; or (ii) where a decision is contrary to law; or (iii) the failure to take a decision results in a breach of a statutory duty or a fundamental right. Once a decision is taken, its validity can be tested on procedural and substantive grounds including proportionality and manifest arbitrariness”.

The court was hearing a plea by Shri Amarnath Barfani Langar Organisation, a voluntary organisation involved in arranging food, shelter, medical aid, etc, for the pilgrims. The organisation prayed that the conduct of the ritualistic worship be restricted to the priests, trustees, etc, and people’s participation not be allowed keeping in view the pandemic.

Appearing for the petitioner, senior advocate Devdutt Kamat said it is a public health issue and there are nearly 9 lakh coronavirus cases in India. The petitioner also sought a direction that arrangements be made for “live darshan” at the shrine through the internet and electronic media.

Justice Chandrachud, however, observed that “it’s for the authorities to consider whether permission should be granted for the yatra” and asked, “why should we assume that the administration will not take the right decision and start taking over the administration of various parts of the country?”

The counsel contended that courts the world over have said that religion and freedom of expression has to yield to larger public health. “They are allowing the yatra despite their own guidelines,” Kamat said, adding that ultimately it will be the public that suffers if the virus spreads.

The court said it is not equipped to decide whether the yatra should be held and what steps can be taken to ensure that an outbreak does not take place.

On the reference to the Puri order, the bench said the initial order was based on the basis of information given to it that it is “well nigh impossible to ensure that there is no congregation.”