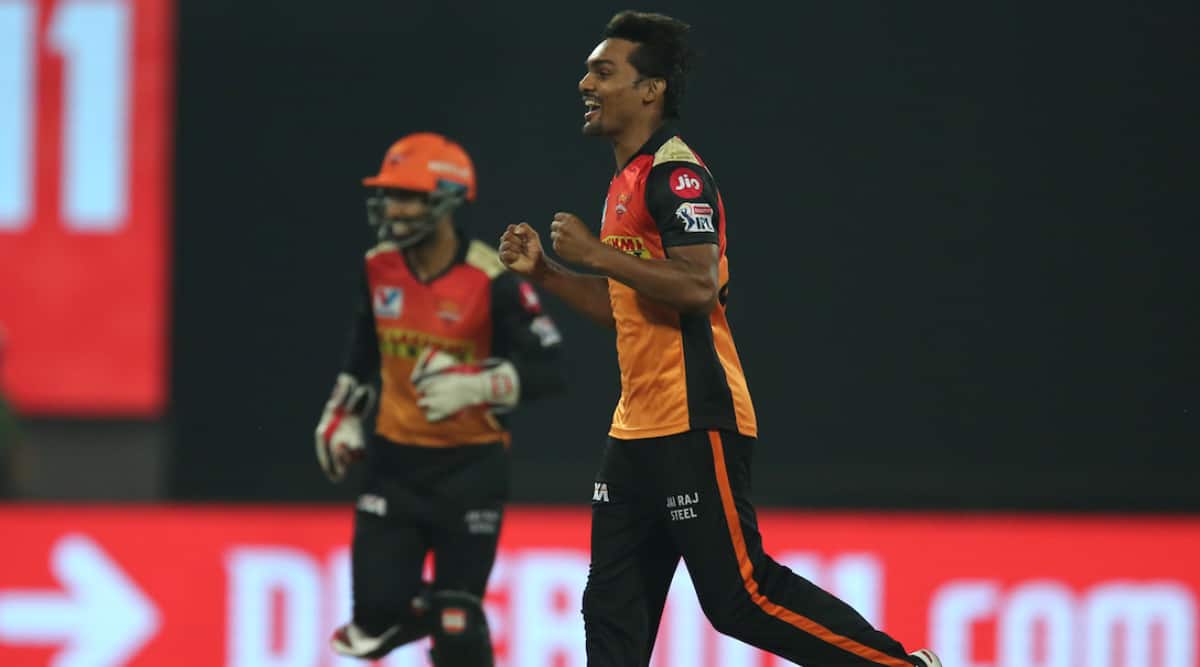 Surviving a mid-match stutter — evoking nervous memories of their capitulation against Kings XI Punjab — Sunrisers Hyderabad earned a five-wicket victory over Royal Challengers Bangalore while chasing a low total to live another day in the league. A superior run rate parachuted them to fourth spot on the table, though they would require another win and favourable outcomes from other games to nail a playoff berth.

Swing with the new ball, spin later on and slowness throughout — it was an antithesis of a T20 wicket. It made for slow-burning but intriguing cricket — batsmen trying to figure out boundary-scoring outlets and bowlers striving to find the perfect length and methods. A day when the usual T20 manual had to be torn apart.

Everyone was forced to adapt — batsmen had to curb their big-hitting instincts. It was not a surface where they could swing their arms freely – even if the boundaries were on the shorter side – but one where they had to wait for the perfect ball, the loosest of loose balls to summon the big strokes. Bangalore’s buccaneering opener Devdutt Padikkal would testify. He attempted an ambitious lofted straight-drive off Sandeep Sharma, who was nibbling the ball around. Not at supersonic pace, but with sufficient movement and accuracy to keep batsmen wary. This ball bent fractionally inward after pitching and beat Padikkal’s futile swipe.

Two wickets in quick succession and both were picked by @sandeep25a. A combination of good bowling and smart captaincy got #SRH the wickets. https://t.co/3vM5Y7xP3L #Dream11IPL

It was a pitch on which driving on the rise was as fatal as jumping in front of an express train. But there is only so much a batsman can do about curbing his instincts. Kohli could not resist the on-the-rise drive through covers – a stroke he plays most delightfully – but on this occasion, he could only scoop it to a swooping Kane Williamson. To Sharma’s credit, he lulled him into the stroke by pitching the delivery further up the pitch than usual. He was equally conscious of not bowling at full pelt — he generally bowls at 135kmph, but on the slow surface, he barely touched 130.

But Bangalore needn’t panic. For they have T20’s equivalent of a human Swiss Army knife — AB de Villiers. But it was a strip where he could not be Mr 360. Maybe, Mr 180. Even this avatar of de Villiers would suffice, and he seemed the only batsman who seemed to coax the pitch into submission. He pulled Rashid Khan through deep midwicket, before thumping Shahbaz Nadeem over long-on, an embodiment of the timing he could generate even on this snail-like surface. Shortly though, the gift of timing undid him, as he ferried a delicious slap straight into deep point’s palms. With him evaporated Bangalore’s best hopes of a total in excess of 140 and they settled for 120/8.

It could be argued that the slow surface handed a decisive advantage to Sunrisers, but they commendably utilised the conditions, bowling with precision and cunning. The variety of their bowlers was astounding — Sharma swung, Jason Holder purchased extra bounce, T Natarajan skidded the ball, Rashid Khan spun the ball both ways, Shahbaz Nadeem judiciously mixed his arm ball with conventional away-spinners. It was too heady for even Kohli and de Villiers to handle.

Besides grabbing two wickets in the 19th over, those of the dangerous Chris Morris and utilitarian Isuru Udana, Jason Holder rattled a precious 26 off 10 balls to take Surnisers home. When Kane Williamson departed in the 13th over, an implosion lurked — only two games ago they had imploded while chasing a meagre target. But Holder allayed the fears with a brace of gorgeous sixes, which eliminated the pressure, before wrapping up the match with his third six.

#SRH get to No.4 in the Points Table after Match 52 of #Dream11IPL pic.twitter.com/y4ElJcd4w4

Mumbai Indians: They had already qualified for the playoffs before Saturday’s match, and by thrashing Delhi Capitals, Mumbai Indians made sure of a top-two spot and two chances of making the IPL final.

Royal Challengers Bangalore and Delhi Capitals: The winners of Monday’s game between these two will be guaranteed a top-two spot while the losers can even find themselves out of the competition, depending on other results.

Sunrisers Hyderabad: They need to beat table-toppers Mumbai Indians to stay in the hunt. They would also hope for Kings XI Punjab to lose against Chennai Super Kings on Sunday, and the match between Kolkata Knight Riders and Rajasthan Royals to be a close one. They have two things going in their favour – their much better net run rate, and the fact that their match is the last league encounter, which means they would know exactly what they need to qualify.