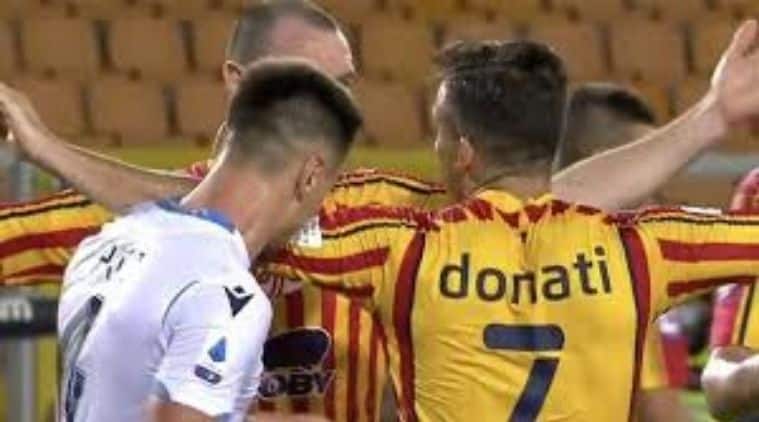 Lazio’s bad night was complete when Patric was sent off for biting Giulio Donati. (Videograb)

Lazio defender Patric could be facing a lengthy ban after being sent off for biting an opponent. The incident happened in stoppage time of Lazio’s 2-1 loss at relegation-threatened Lecce on Tuesday.

With Lazio’s title chances all but evaporating and players getting into an argument, the 27-year-old Patric suddenly dipped his head and bit Lecce defender Giulio Donati on the left arm.

The incident could be seen as even more serious because of the effects of the coronavirus pandemic, with soccer having resumed under strict regulations which even discourage hugging in celebration after a goal.

Luis Suarez was banned for 10 matches by the English FA in 2013 for biting an opponent when he played for Liverpool. The Uruguay forward was also suspended for nine international matches for biting Italy defender Giorgio Chiellini at the 2014 World Cup. 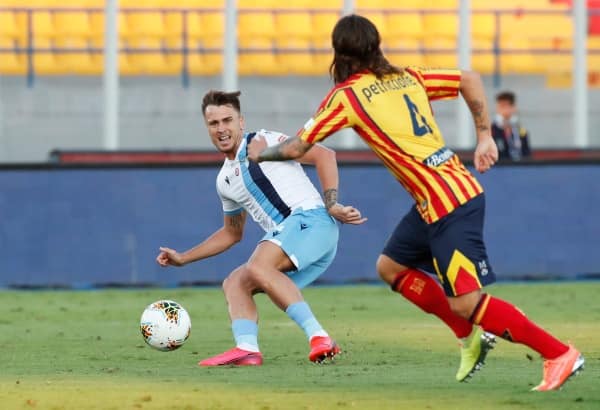 Lazio’s Patric in action, as play resumes behind closed doors following the outbreak of the pandemic (REUTERS)

Lazio’s Serie A title hopes all but evaporated in a 2-1 loss at relegation-threatened Lecce, which also missed a penalty and had a goal disallowed. Fabio Lucioni and Khouma Babacar scored for Lecce after Felipe Caicedo had given Lazio an early lead on Tuesday.

Second-place Lazio remained seven points behind Juventus, which played at AC Milan later and could take a huge step towards a ninth successive Serie A title. Lazio was just a point behind Juventus when the season was halted because of the coronavirus pandemic. It was on a record unbeaten run of 21 straight matches but the capital side has lost three of its five matches since the season resumed.