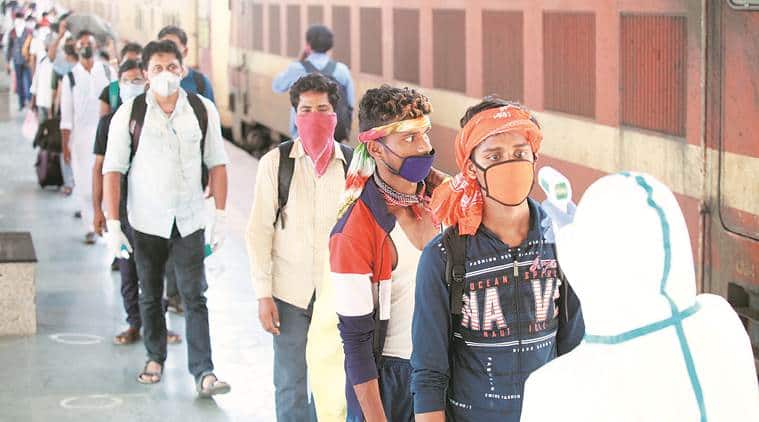 Migrant workers screened at Lokmanya Tilak Terminus in Mumbai as they return to Maharashtra. (Express photo by Pradip Das/File)

The Supreme Court Thursday pulled up the Maharashtra government on the migrant workers issue and refused to accept its claim that there was no problem in the state on this front, saying it is its duty to find out the lapses and act on them.

A bench of Justices Ashok Bhushan, S K Kaul and M R Shah asked the state to file a fresh affidavit listing the steps taken to mitigate the problems of migrant workers wanting to return to their native places amid the COVID-19 crisis.

It is not an adversarial litigation, the bench said, posting the matter for further hearing on July 17.

During the hearing of the case taken up suo motu (on its own) by the top court on the miseries of migrant workers during the COVID-19 lockdown, the bench said: “What is happening in Maharashtra? Large number of migrant workers are still in the state.”

Solicitor General Tushar Mehta, appearing for the state, said that the latest affidavit has been filed on July 6 in compliance with the apex court’s order.

He said that a list was provided to the Centre with regard to migrant workers, who have been sent to their native places by the state.

Mehta said the crux of the affidavit was that the migrants who wanted to leave earlier have now decided to stay back as the state opened up employment opportunities and since May 1, around 3,50,000 workers came back to work in Maharashtra again.

The bench said it is the responsibility of the state to find out which group of migrants are getting food, transport and other facilities or not getting them.

Mehta said that whoever wanted to shift has been shifted and those who went back may not be getting jobs as per their skills, like a carpenter cannot work as a labourer in an agricultural field.

“Your affidavit is not up to the mark… We cannot accept the State’s claim that there is no problem in the State of Maharashtra. They have treated this as an adversarial litigation. You (Mehta) must advise them to file a proper affidavit by next date of hearing,” the bench said.

Mehta said he would do so and personally do the vetting of the State’s affidavit and ensure that more relevant details are provided on the issue.

Senior advocate Ranjit Kumar, appearing for Bihar government said that reverse migration has started happening in the state and most of the trains originating from Patna to other cities are running full.

Mehta said that this is a healthy thing as the reverse migration is happening because industries and business are now opening up.

Meanwhile, the top court tagged the PIL filed by NGO CPIL, seeking various reliefs including a national plan on COVID-19 management with the suo motu case.

During the hearing of the PIL, senior advocate Kapil Sibal said that there is a theoretical national plan on COVID-19 management and want that Solicitor General Tushar Mehta place it on record.

Mehta said that the national plan for COVID-19 management as averred for in the PIL filed by Centre for Public Interest Litigation (CPIL) has already been placed on record in other matter.

The bench accepted the contention of Mehta and told Sibal that this issue has come up earlier also and now they have placed the plan on record.

Sibal said that they need a system in place which are in consonance with the Statutes, in this case it is a national plan.

The bench asked Mehta to supply the copy of the Covid management plan to Sibal and senior advocate A M Singhvi, appearing in the matter.

Singhvi added that he wanted to give some suggestions that help and rehabilitation should work in tandem and registration should not be the basis for availing government schemes as it excludes lots of people.

He said that government can consider a constructive scheme for insurance for migrants and a work plan and centralised system to rehabilitate the migrants.

Mehta told Singhvi that he should go through the reply affidavit as it contains all the relevant details.

The bench posted the matter for further hearing on July 17.

On June 19, the top court had asked the Centre and all the State to ensure that all stranded migrant workers willing to return must be sent to their native places without any fare being charged from them.

The top court, on June 9 had directed the Centre and state governments to identify and send back within 15 days by train or bus the stranded migrant workers willing to return to their native place, and also asked them to help the returnees find jobs lost during the national lockdown.

Noting there have been instances of ?excess” by police and paramilitary personnel against the migrant workers, the court also asked authorities to consider “withdrawal” of criminal cases against some of them for violating social distancing norms.

The suffering people without jobs have to be dealt with in a “humane manner”, it had said.

A help desk should be set up for those who wanted to return to their old places of work, it had said while taking suo motu (on its own) cognisance of the ?problems and miseries? of lakhs of migrant workers.

The top court, which had on May 28 passed a slew of directions including asking the states not to charge any fare from the returning workers, had noted that fresh requests for 171 ?Shramik Special’ trains have been made so far by the states from the Centre, and directed that any additional demand be fulfilled by the Railways within “a period of 24 hours.”