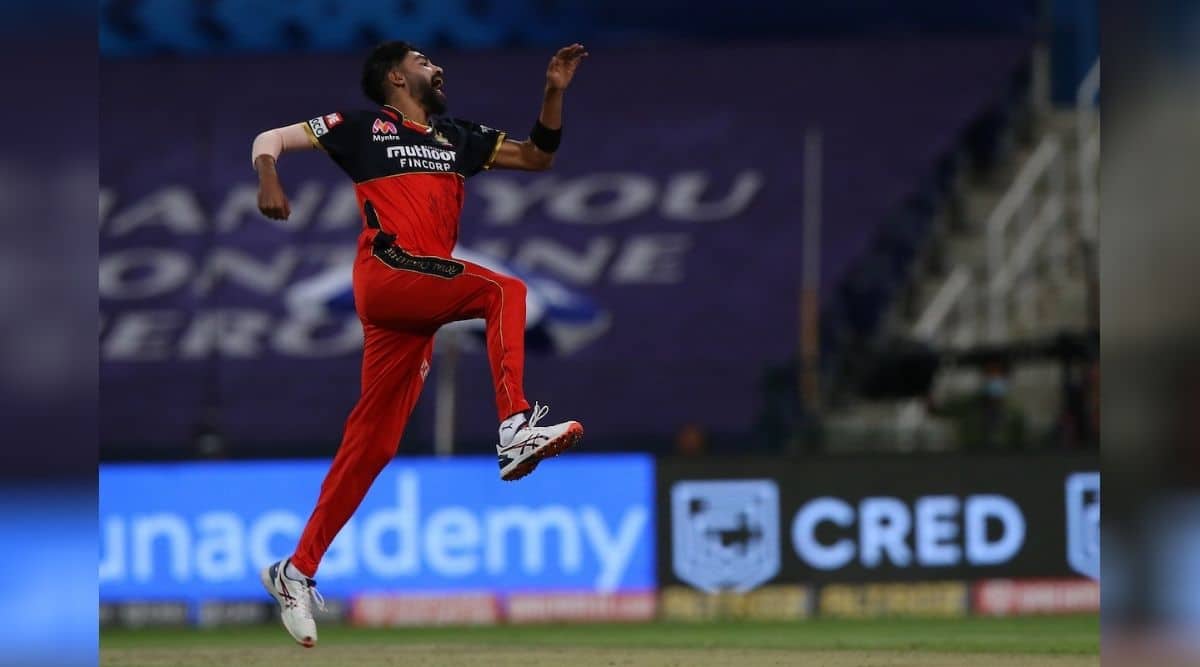 Once Chris Morris generated swing early on, Siraj was asked to bowl the second over following a discussion with wicketkeeper AB de Villiers. (BCCI/IPL)

Siraj’s first three wickets came without conceding a run as he became the first bowler in IPL history to bowl two maidens in a single game. RCB restricted KKR to a paltry 84/8 and chased down the target in 13.3 overs.

Once Chris Morris generated swing early on, Siraj was asked to bowl the second over following a discussion with wicketkeeper AB de Villiers.

“We hadn’t planned that I would open but when we went out, Virat bhai said ‘Miyan, ready ho jao (Sir, get ready!), you will have to bowl…’ It boosted my confidence,” the Hyderabadi pacer, who returned with figures of 4-2-8-3, said after the eight-wicket win on Wednesday.

“Morris beat the batsmen (in the first over) and then Virat bhai spoke to AB de Villiers (behind the stumps) and gave me the bowl,” he added.

“Initially, I didn’t think it would swing so much after seeing the wicket. I just backed my strength and really enjoyed a lot.”

Brought in the second over, Siraj struck in his third ball with a good length ball that went away of Rahul Tripathi.

In his next delivery, he cleaned up Nitish Rana, with a ball that sharply cut back in and breached the left-hander’s defence. In the next over, he accounted for Tom Banton with another outswing delivery.

His bowling figures became the most economical this season.

A natural in-swing bowler, Siraj has been practising with the new ball and generating outswing in the practice sessions.

“I’ve been a natural inswing bowler but while practising I have started bowling outswing a lot better.

“In our practise sessions, we have Devdutt Padikkal and Parthiv Patel. I bowl the same length to them which I bowled to Nitish Rana. I did the same thing in the game and was able to execute it well,” he said.

Having endured a tough outing against the same side in 2019, it’s now a story of going from being zero to hero for Siraj.

Siraj was hammered for 36 runs in 2.2 overs before being removed from the attack for bowling two beamers as KKR chased down 206 with five balls to spare in their IPL 2019 match.

In the same game, Siraj had also dropped a sitter from Chris Lynn and faced a lot a criticism.

Often sidelined in presence of Chris Morris, Navdeep Saini and the spin duo of Yuzvendra Chahal and Washington Sundar, Siraj got his fourth match on Wednesday when he was included in place of Shahbaz Ahmed.

“I’ve always had a lot of support from the RCB setup. All I wanted to do this year was give a magical performance. I wanted to do something different this year,” Siraj, who played his fourth match of the season, said.

“Whenever I used to think about my performance in the IPL, I had made up my mind that I would deliver a performance to remember. It’s about doing something different, something magical,” he concluded. PTI TAP

Loss against RCB was morale-crushing, but destiny still in our hands: McCullum

Brandon McCullam head coach of KKR and Abhishek Nayar assistant coach of KKR during match 39 between the Kolkata Knight Riders and the Royal Challengers Bangalore at Abu Dhabi on  October 21, 2020. (BCCI/IPL)

Disappointed with his team’s “timid approach” with the bat , Kolkata Knight Riders head coach Brendon McCullum has admitted that the crushing defeat against Royal Challengers Bangalore would definitely affect the morale of the side, but their destiny is still in their hands.

He believes KKR can go all the way to the final, despite just hanging on to the fourth spot in the eight-team competition with 10 points from as many games.

“This (loss) is going to affect a little bit in terms of our confidence. We need to work hard on ensuring our morale doesn’t drop at the same time having those honest conversations around how we improve,” McCullum said after the eight-wicket loss to RCB in an IPL game here on Wednesday night.

“But I still firmly believe that we have a side which can be there later on in the tournament, come finals. We just need to improve slightly.

“We’re still fourth in the tournament, which is very fortunate for us. Destiny is still very much in our hands. We have just got to tighten up some of those areas where we’re deficient tonight and make sure we improve on our performance,” he said.

McCullum admitted that they were not good enough and lacked intent in the lop-sided contest against RCB.

Electing to bat, KKR top-order crumbled against Mohammed Siraj’s (3/8) devastating new-ball show to register their second lowest total — 84 for 8, a target which RCB chased down in in 13.3 overs with eight wickets in hand.

McCullum said there was no demon in the pitch but their batsmen lacked intent against some quality RCB bowling.

“…I didn’t think there was a lot in the wicket. Siraj obviously bowled well and (Chris) Morris at times also. But if anything, we were just a little timid in our approach,” the former New Zealand captain said.

“That’s just a bit frustrating because we spoke at length before the game about trying to be positive and show some strong intent, so that’s something we’ll have to address in the next few days.”

Siraj became the first bowler in the history of IPL to bowl two maiden overs as he dismissed Rahul Tripathi (1), Nitish Rana (0) and Tom Banton (10) to virtually kill the contest in the first four overs.

“I just think we weren’t able to enter the game at any stage, none of our top-order batsmen were able to get anything going,” McCullum said.

“Defending 85, you might just win one in 50 games. I think RCB were very good tonight. We’re very poor with bat in hand. You’re not going to win too many games from 40 for 6. But we’ve got to bounce back because we’ve got another game in a few days.

“With the conditions being slightly challenging at times, you’ve got to find a way to still pick yourself up and try and get a result in the next game,” he added.

McCullum said self belief is the need of the hour after such a disappointing performance.

“For us, it’s about maintaining belief. As long as our morale stays high, and our belief within the dressing room stays high, then we have the talent within our setup, the intelligence and quality of players, to be able to go deep in the tournament.”

KKR have four matches left to secure a play-off spot and next face Delhi Capitals here on Saturday.