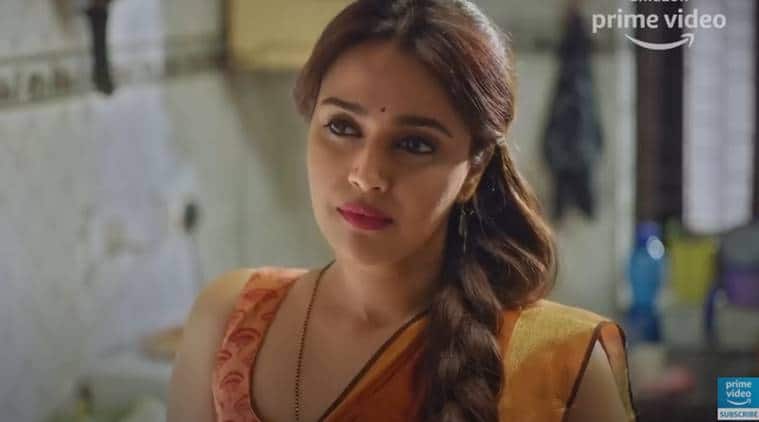 Swara Bhasker said her web-series Rasbhari shows how repressed people are when it comes to female sexuality.

The Amazon Prime Video series is set in Meerut and revolves around a school boy Nand (Ayushmaan Saxena) who falls for his teacher (Bhasker). Things become complicated when people find out about the teacher’s supposed sex-obsessed alter-ego, Rasbhari.

Bhasker said the series, co-created and produced by Applause Entertainment and Tanveer Bookwala, shows how repressed people are when it comes to female sexuality.

“It shows you the hypocrisy of this world view. The whole show is a critique of patriarchy and patriarchal thinking where women’s sexuality has to be repressed to the point that it surfaces as an alter ego and of the fact that men are scared of female sexuality and they will vilify women,” Bhasker told PTI in an interview.

“The show is about this hypocrisy, our discomfort with sexuality and understanding that we have different standards for men and women,” she said.

Censor board chief Prasoon Joshi had recently tweeted criticizing a scene where a child is dancing in front of a crowd. Swara had defended the scene in question saying that Joshi perhaps misinterpreted the scene.

The actor, who has been at the receiving end of criticism and abusive trolling on social media as well, said she fails to understand the hoopla around it when people don’t have an issue with adult sex comedies starring men.

“Nobody bats an eyelid to adult sex comedies (with men) but when you have a show about a woman, who is celebrating her sexuality, then everyone talks about Indian values, culture and the future of children,” Bhasker said.

She believes a lot of people, who are criticising the show haven’t even seen it.

Bhasker, personally, liked the way makers have dealt with various issues in an interesting way.

“I liked the tongue-in-cheek way in which the story was told, the fact that it was dealing with adolescent sexuality in a frank manner. I liked the character. It was a challenge to play this kind of double role, with such two distinctive personalities,” she said about the series, written by Shantanu Shrivastava and directed by Nikhil Nagesh Bhatt.

Bhasker, who was born and raised in Delhi, is an outsider in the film industry who has made a mark for herself with her critically acclaimed roles in films such as Raanjhanaa, Tanu Weds Manu, Anarkali of Aarah and Nil Batey Sannata.

With Sushant Singh Rajput’s death at the age of 34, the film industry has been facing criticism with the way it treats people who don’t come from traditional film families.

Bhasker, however, believes that while power dynamics exist in the industry, talent is important for someone to get ahead.

“The structural criticism that is being made of the industry is true. The industry has a lot of flaws and we must discuss it. But we must also acknowledge that talent is something you can’t hide.

“We have to look at things in a balanced way. There is power struggle, there is groupsim, they give awards to their favourites but the fact is you can’t hide talent. Talent is appreciated and we should not deny that,” Bhasker said.

She pointed out that the biggest of superstars in the Hindi film industry have been outsiders including Dilip Kumar, Dev Anand, Amitabh Bachchan, Shah Rukh Khan, Priyanka Chopra, Irrfan Khan, Nawazuddin Siddiqu, Richa Chadha, Radhika Apte, Kangana Ranuat and even Rajput, who was one of the most successful actors of his generation in his brief career.

“….Nawazuddin Siddiqui had one scene in ‘Munnabhai MBBS’, he is India’s finest talent today. Pankaj Tripathi is one of the most sought after actors today be it in films or web, Manoj Bajpayee and Jimmy Shergill are another great example,” Bhasker added.

The actor said it was important for those in power to behave responsibly whether they are from the outside or from within the industry.

“A lot of these things are a result of power dynamics and dynamics of successful and non-successful person. Will the outsiders behave responsibly or differently when they become stars to the stars they now accuse? That is the question to be asked because power play will exist even between the outsiders who become stars.”