Priyanka Chopra and Nick Jonas have never failed to set couple goals. On Valentine’s Day, irrespective of the fact that they were miles apart, they made sure to make each other feel loved. Priyanka, who is in London, managed to pull off a surprise for her husband, who is in Los Angeles. The White Tiger actor surprised the singer-writer with an adorable decoration of candle lights on their house’s terrace.

Sharing a picture on his Instagram stories, Nick wrote, “Came home after a long day on set to this lovely surprise from Priyanka Chopra all the way from London. I love you babe. Happy Valentine’s Day.” Nick also made sure to show his love for his wife with a romantic gesture. The Jumanji actor filled Priyanka’s room with thousands of red roses. 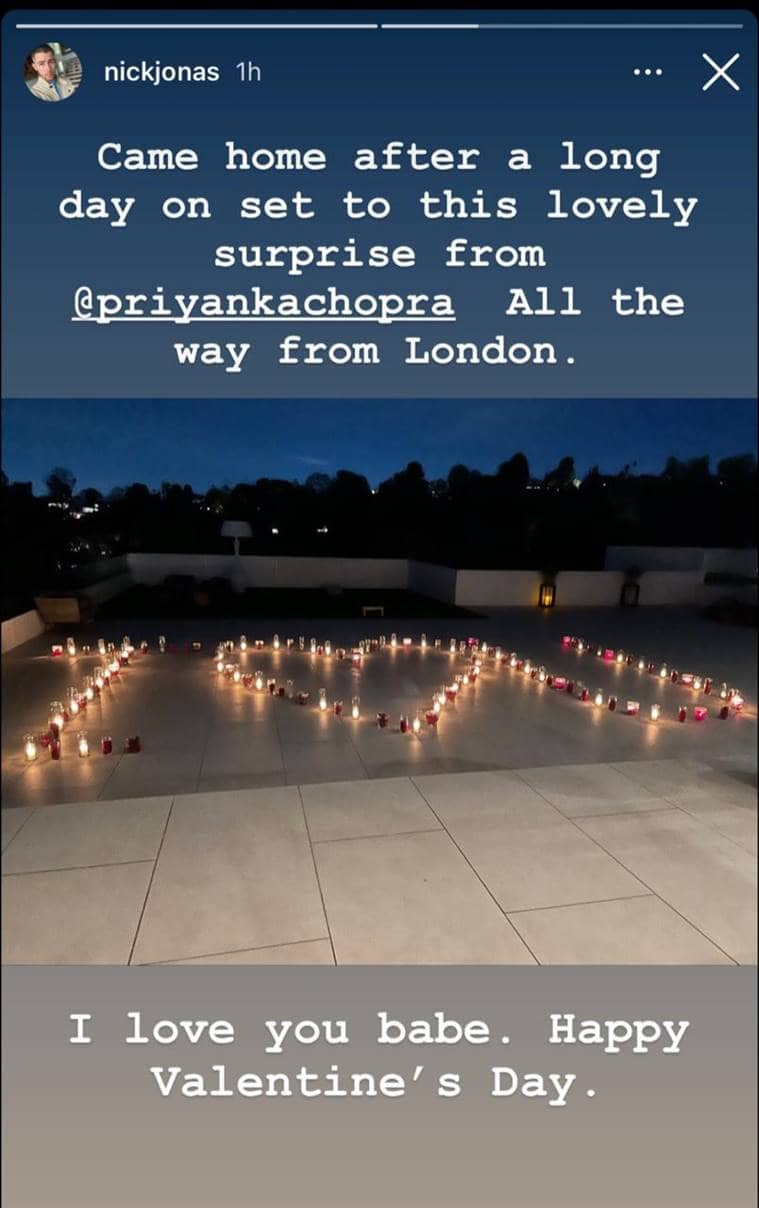 Sharing the picture of her surprise, Priyanka expressed that she missed having Nick by her side. “I wish you were here @nickjonas just a couple of roses…” Priyanka captioned the picture. Replying to her, the singer wrote, “Just a few.”

Earlier in the day, Priyanka and Nick shared throwback pictures to wish each other on Valentine’s Day. Nick shared a picture from one of their vacations together and thanked Priyanka for “filling every day with happiness and peace.”

“Where ever you go, I’ll go, cause we’re in it together. For better or worse, hold on, cause it only gets better. 🎵 Happy Valentine’s Day @priyankachopra thank you for filling every day with happiness and peace. I love you to the moon and back,” the ‘Sucker’ singer wrote as a caption, replying to which Priyanka commented, “My forever guy. I miss you so much.”

On the work front, Priyanka released her memoir titled Unfinished. She is basking in the success of her recently released film The White Tiger, which is currently streaming on Netflix. The actor spoke about her husband on the Jess Cagle Show. She compared her father to Nick and said, “I don’t know if I was looking for the father of my children when I met Nick. I just met a guy that really surprised me. Nick is very self-assured as a man and that’s not a very common trait with men. He knows what he wants. He has integrity. He is my greatest cheerleader. He enjoys it so much when I succeed. My father was like that to me,” she said.

The 38-year-old will next lead the romantic drama Text for You, which also stars Sam Heughan and Celine Dion. She has been also cast in an undisclosed role in Matrix. Nick, meanwhile, is shooting for the upcoming season of The Voice. He will be returning to the show as a judge.