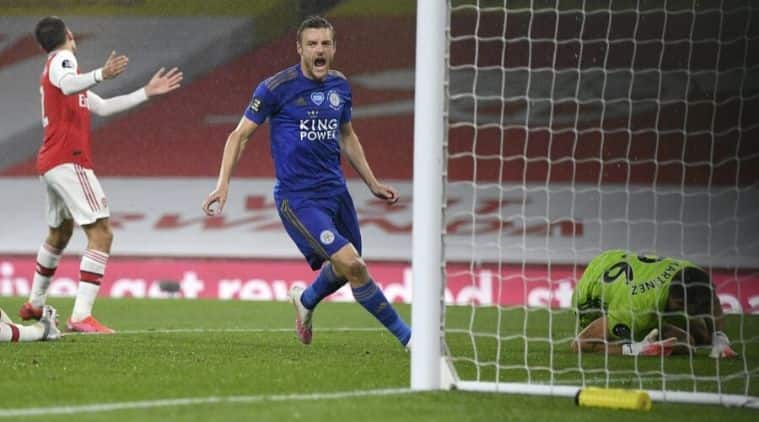 On a night of spectacular goals in the Premier League, it was a pair of tackles that had the most significant impact on the hard-fought race for Champions League qualification.

Chelsea’s 3-2 win at Crystal Palace was only secured thanks to a remarkable last-ditch challenge by center back Kurt Zouma, who somehow made up ground to divert the ball away as Christian Benteke was about to shoot late in stoppage time.

Then, hours later at a rain-soaked Emirates Stadium, Arsenal was leading 1-0 against Leicester and on course for a win that would have thrown open the fight for a finish in the top four when substitute striker Eddie Nketiah was handed a straight red card in the 75th minute for a studs-first lunge on James Justin.

Jamie Vardy equalized nine minutes later with a goal that took a while to be confirmed by the video assistant referee to seal a 1-1 draw, dealing a huge setback to Arsenal’s improbable hopes of climbing into the top five.

The two results left Chelsea in third place and a point clear of Leicester, which finally dropped to fourth after a poor run of results in the league since late January.

Manchester United is four points back in fifth place, which will secure qualification for the Champions League if second-place Manchester City fails to overturn its two-year European ban.

Arsenal stayed seventh, five points behind United with only four games remaining. United’s game in hand is against Aston Villa on Thursday.

It was a contrasting night for two of Arsenal’s bright young hopes as the team’s Champions League ambitions took a hit.
Bukayo Saka, a talented 18-year-old winger, enhanced his reputation with a superb pass to tee up Pierre-Emerick Aubameyang in the 21st minute for the striker’s 20th league goal of the season.

Arsenal delivered one of its best halves under Mikel Arteta and should have been further ahead by the time another highly rated youngster,

21-year-old Nketiah, came on as a replacement for Alexandre Lacazette and showed poor discipline by lunging at Justin in the center of the field four minutes later. The referee initially showed a yellow card but changed his decision to a red after viewing the incident on the pitchside monitor.
“I know Eddie, he is not an aggressive player,” Arsenal goalkeeper Emiliano Martinez said.

“He slipped and did not want to injure him, and the red card is harsh.”

Vardy’s goal was his league-leading 22nd of the season and left Leicester seven points clear of sixth-place Wolverhampton, which plays its game in hand against Sheffield United on Wednesday. Chelsea manager Frank Lampard was more relieved than overjoyed after his team just about managed to hold onto its lead against Palace.
Moments before the tackle from Zouma, goalkeeper Kepa Arrizabalaga had flung himself to his right to tip onto the post a header from Scott Dann.

“Not good for your nerves,” Lampard said.

Chelsea rushed into a 2-0 lead by the 27th minute at Selhurst Park through goals by Olivier Giroud and Christian Pulisic, the American winger’s third in five games to maintain his great form since the restart.

After Wilfried Zaha pulled a goal back with a 25-meter screamer, substitute Tammy Abraham regained the two-goal advantage for Chelsea only for Benteke to set up what proved to be a frantic finale by scoring a home goal for the first time since April 2018.

Last-place Norwich could be relegated as early as Saturday after squandering an early lead to lose 2-1 at Watford and slip 10 points adrift of safety with only four matches remaining.

For Watford, it was a huge win, its first since the restart, that moved the fourth-from-last team four points clear of the relegation zone.
Danny Welbeck scored the winning goal with an overhead kick from near the penalty spot in the 55th minute. Watford battled back from conceding a fourth-minute goal to Emiliano Buendia, with Craig Dawson scoring the equalizer from a corner in the 10th.

Norwich’s relegation will be sealed if it loses at home to West Ham on Saturday.