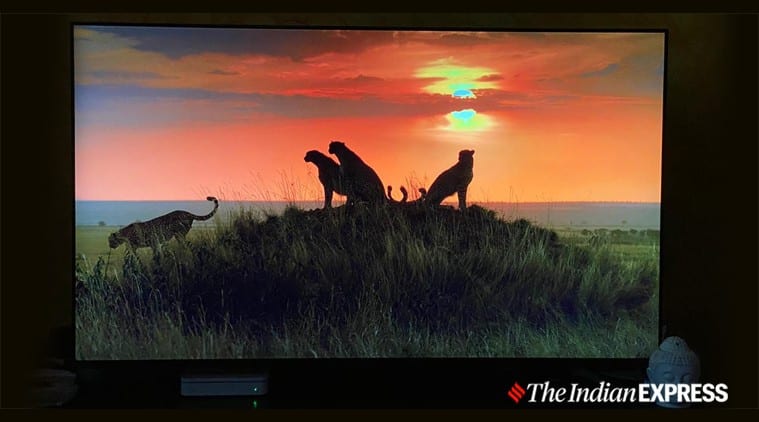 OnePlus U Series is a good option for those looking to upgrade to a larger screen. (Express photo: Nandagopal Rajan)

With most outdoor avenues for entertainment shut, people across the world are congregating once again in front of their televisions for some quality family time. Across India too all brands are seeing an increase in sales of televisions across price points and this makes the launch of the OnePlus U seres timely. OnePlus has been looking at televisions for over a year now and it’s latest range is aimed at giving high-end design, specifications and experience at an even lower price point. Initially I was not sure about reviewing the OnePlus U series 55-inch 4K TV. For a couple years, since I bought a second television and filled up the living room slot, I have resisted television reviews. And a 55-inch television is even more scary when you stay in a regular size Delhi flat — it is almost like bringing an elephant into a cow shed. But I took the leap of faith and soon after there was a window in the Delhi lockdown, the giant was indeed in my living room.

As I temporarily relegated the old 42-inch LG into the store room, I was happy to note that the 55-inch had eased into the space vacated by the smaller screen in the living room. Yes, the Tankha painting gifted my sister, which used to flank the LG, was nowhere to be seen, but I could live with this screen in my home.

The OnePlus U series has a really thin frame and the panel is almost flat in the rear, except for a small bump towards the bottom. This clear design is stunning as it is simplistic. There will be very few televisions that are thinner than this.

And again we are not looking at a premium television here. The TV props up on two-leg stands on both sides. There is a flap that opens at the back to reveal the ports. Once I pushed in my Amazon Firestick the flap wouldn’t close, but then you don’t need a Firestick on this TV. There are no visible buttons anywhere and that is a bit worrying for me as someone who has two TVs with not even one functional remote between them. Plus, you can use voice to search via Google Assistant or Alexa and this too works really well without you having to press down on a microphone button on the remote. 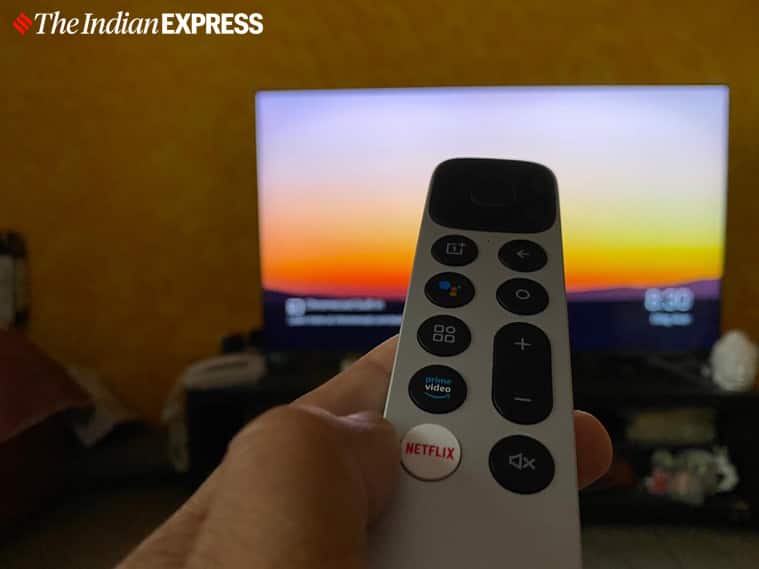 OnePlus has a very unique remote, one that is minimalist as well as overwhelming at the same time. (Express photo: Nandagopal Rajan)

Talking of remotes, the OnePlus has a very unique remote, one that is minimalist as well as overwhelming at the same time. The remote has square on top with a middle button in the middle, so you can navigate and select easily. Then there is a volume toggle, mute, settings and back buttons. Plus, you also get dedicated buttons for Google Assistant, Prime Video, Netflix and OnePlus Oxygen Play. The OnePlus logo takes you to the home screen and, as I discovered after a week of use, powers off the TV on a long press. So with all these buttons, the power button is sort of hidden and at times that is what you need the most.

Once you power on the TV you realise that the bezels are so thin that vanish as you start focusing on the content. When I switched on Netflix for the first time, the app recognised that it was running on a 4K television and soon presented me with the choice to upgrade to the more expensive UHD streaming service. Given the size of the screen and the already impressive visuals it did not take much cajoling. That might be the best upgrade I have ever paid for, because the first show I watched after — Our Planet — almost appeared like a demo show at a television showroom. So as I swiped through the Netflix playlist, the 4K UHD and Dolby Vision tags became strong reasons to pick a show, more to experience the visuals than because of the show itself.

This OnePlus U series TV offers a stunning colour reproduction, coupled with deep blacks to offer what is the closest we can get to a cinematic experience in the present times. Also, this a Dolby Atmos-enabled television and me and my eight-year-old experienced while watching Spiderwick Chronicles, this means you know exactly which direction the trolls and going to approach from. And you can customise both the sound and picture to exactly how you like it. For instance, while watching Night on Earth, I switched to Dolby Vision dark which seemed more apt for the content.
Content is also what the OnePlus has too much off. In fact, you are spoilt for choice and literally every OTT app you use is preloaded. The home screen pulls titles from these apps and you just need to log in if you want to watch any of these. The Oxygen Play screen gives a more structured view into the apps and I preferred this more. The dedicated buttons for Netflix and Prime Videos are convenient, but I ended up going to these apps via the Oxygen Play screen more.

There is also easy options to switch to live TV in cases anyone still has cable at home — I don’t. I used one of the HDMI ports to plug in the FireStick and realised the OnePlus remote controls that screen too. Then you can go to Google Play and download literally any app you need. So who needs cable TV?

Being a OnePlus device, there are some good features that make life easier for users. For instance, there is the built in data saver app that lets you set limits for data consumption on the TV and get alerts for the same. My 1GB alert kept popping up every 115 minutes while watching 4K titles. Though I have expanded by broadband limits using lockdown, this is a great feature to have for all since televisions can consume a lot of data pretty fast. 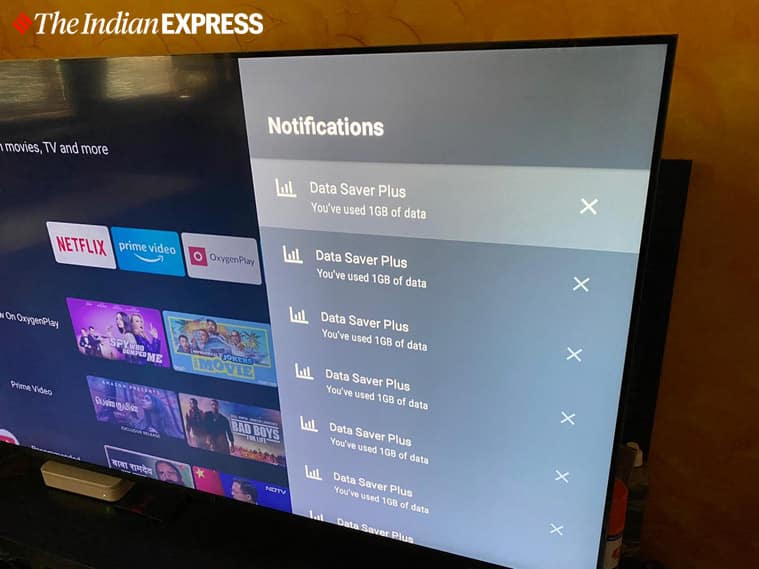 The built in data saver app that lets you set limits for data consumption on the TV and get alerts for the same. (Express photo: Nandagopal Rajan)

Then there is the OnePlus Connect app that lets you control the television using an Android phone. I used it with the latest OnePlus 8 Pro and you start by seeing a screen of recommendations that can be quickly played on the TV. While it does everything you expect a remote to, it also gives easy access to loaded apps. Also, there is a screenshot feature I really loved capturing something on the TV that you would live to save for later. Then there is the kids mode, where I can set time limits and ensure my son watches just clean stuff on TV. That was a relief.

Overall, the OnePlus U Series is a good option for those looking to upgrade to a larger screen. It is also good for those who want to get rid of all their fire sticks and Android boxes that make TVs smarter. This is a smart TV in the real sense of the term. At a price of Rs 49,999, the 55-inch TV is great value for money and a one-stop-shop for all your entertainment needs.