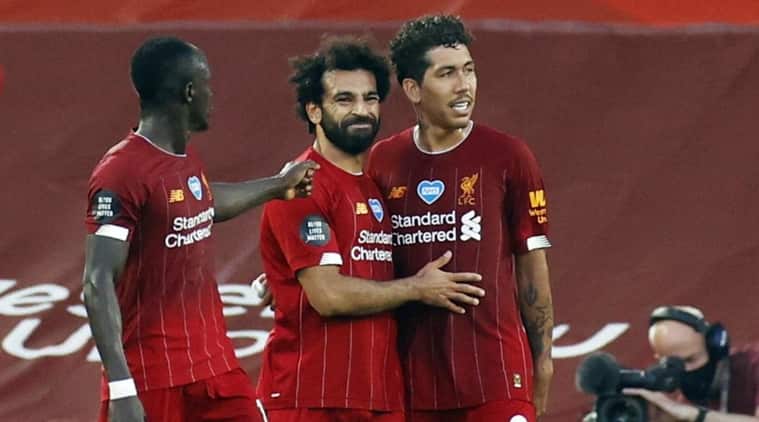 Mohamed Salah scored twice as champions Liverpool moved on to 92 points with a 3-1 win at Brighton and Hove Albion in the Premier League on Wednesday.

The victory kept Liverpool on target to secure a record Premier League points tally, with Jurgen Klopp’s side needing nine from their remaining four games to beat the mark set by Manchester City, who amassed 100 points in 2017/18.

Liverpool were 2-0 up within eight minutes after Brighton paid heavily for sloppy work in their attempt to play the ball out from the back.

Naby Keita robbed Davy Propper and slipped the ball to Salah who confidently drove home to open the scoring in the sixth minute.

Two minutes later and Brighton were caught out again by Liverpool’s pressing, this time Salah setting up Jordan Henderson who finished with a perfect drive.

Graham Potter’s 15th-placed team pulled a goal back on the stroke of halftime with Leandro Trossard sweeping home a first-time shot after a pinpoint cross from Tariq Lamptey.

Egyptian Salah wrapped up the win, Liverpool’s 30th in their 34th game of the season, with a superbly angled near post header from an in-swinging Andy Robertson corner.

Salah now has 19 goals, three behind Leicester City’s Jamie Vardy in the race for the “Golden Boot”.

Liverpool host ninth-place Burnley at Anfield next, followed by Arsenal away, Chelsea at home and Newcastle United at St James’ Park in the final game.

David Silva scored one goal and made two more as Manchester City put on a passing masterclass to overwhelm Newcastle United with a 5-0 Premier League victory on Wednesday.

Gabriel Jesus put the home side ahead in the 10th minute, stabbing home Silva’s clever pass, and Riyad Mahrez made it 2-0 in the 21st minute when Kevin De Bruyne pulled the ball back for him to sweep home from the penalty spot.

Things went from bad to worse for Newcastle in the second half when Matt Ritchie’s last-ditch attempt to dispossess Jesus hit fellow defender Federico Fernandez and flew into the goal to put City 3-0 up.

Silva got himself on the scoresheet in the second half, stroking home a beautiful free kick from the edge of the box in the 66th minute before setting up substitute Raheem Sterling for a simple goal in stoppage time to make it 5-0.