Carolina Marin can boast of a medal haul of three World Championships and an Olympic gold. (Twitter/CarolinaMarin)

It was a strange start to the summer when the super-combative badminton Olympic champion Carolina Marin announced she was ready to hand over all her medals.

Not pass on the baton of excellence, so to speak, to one of her many competitors who would love to boast of a medal haul of three World Championships and an Olympic gold. But hang those precious ribboned discs, unique to her in the world, around the necks of thoroughly deserving medical care professionals – doctors, nurses and janitors – who have been treating Covid-19 patients.

“Next to you, I’m nothing,” Marin would tell frontline hospital professionals of Virgen del Mar hospital in Madrid, where a bunch of tired staff were given a day-end surprise when the Rio Games women’s singles champion connected with them over a long videocall interaction, making them chuckle, asking about their well-being and telling them how they had inspired her.

At the Sanitas Cima hospital in Barcelona later, she told care workers they were the real champions after gushing about how they had successfully treated a 100-year-old man against all odds and sent him home happy, calling it “our own triumphant record” as a fellow Spaniard.

“I offered all my medals to them when I was talking to them as they are in fact the real heroes in Spain. They deserve every applause and accolade,” Marin told The Indian Express via email, adding how her multiple interactions changed how she thought of national honour.

“It was inspirational. I just wanted to thank them. They are the real heroes for all the effort in taking care of sick people in Spain during these terrible times. They did an incredible job and I would like to thank the frontline fighters who risk their lives every day and continue to serve people like us,” she said.

What Marin learnt from these informal chats where doctors spoke about their exhaustion, complicated choices, working as a team, and empathising with patients who were always alone and looking only to borrow a cellphone to connect with family, was just how dire the situation was. It made the restless and hyper-energetic Marin take a pause from the one thing she can’t live without – training chasing her golden goals. “As much as the urge has been to return to court, the pandemic and the loss of human lives in my country and the world has shaken us all. Staying at home was the only way to help all those brave hearts fight it out for us,” she said.

Even as the outbreak exploded in Spain, Marin had a situation at home while wrapping up playing at the All England in mid-March: her father had been hospitalised in the lead-up to the tournament after an accident. “That definitely affected me but when I’m on the court, I only think about giving my best irrespective of the situation. I knew my father was in good hands and there are people around him, and am happy to say he is recovering now.”

She rushed home from All England after her semis, and straight into a lockdown in her hometown Huelva. “The situation was very grim with Covid played havoc with so many dead and life coming to a standstill the world over. These are uncertain times and a tragedy that no one has seen or experienced. Right from the lockdown to the fear and the pain of losing people,” the 26-year-old says.

“Winning Olympics”, Marin says, “was a dream that I and my coach had seen and my entire team had put together unbelievable hard work for the four years to get to that gold in Rio. Now my goal is set again.”

A lot more experienced this time, expectations have raised the bar for hard work. “This pandemic is unprecedented, yet we have so many inspirational stories that can only make me want to give back. Taking to the court and playing to win will be a way to pay gratitude for these health warriors. I hope people in India can come out of it soon too,” she says of a country that has warmly welcomed her, the last time in Season 4 of the Premier Badminton League.

Marin spent the lockdown in Huelva with her mother, perhaps the first long spell spent at home since she moved to Madrid at the start of her teens. “I’m glad I could take care of her and she was happy to have me around. But now I have already started training and am missing her by my side,” she says.

READ | How Carolina Marin reignited fire in her belly

Typically, she would spend her days cooking (“I love it”), reading books, watching movies, catching up with her cousins online. “I had my training sessions too. The whole day was kind of very busy. Coach had given us a detailed training programme for a week and the sessions were monitored by the other coaches,” she says.

There were Skype sessions with her psychologist Maria, and she listened to music and practised different exercises to relax. Cooking, Marin has said earlier, is not something she indulges in only as a therapeutic. Living on her own at her training base in Madrid, she “cooks to eat”, as no one else otherwise would. She took over the Huelva kitchen pretty much from Day 1. “What I enjoyed the most was catching up on web series in Netflix; La casa de Papel (Money Heist) and Vikingos (Vikings) are my favourites.”

A meticulous planner who would sit and rehearse pronunciations of different Indian junior players’ names to perfection when she did a small commentary stint for the league in Bangalore last year, Marin was bound to have kept an eye on what her competitors – and crucially, gold medal contenders Tai Tzu-Ying, PV Sindhu, Nozomi Okuhara and Akane Yamaguchi – were doing. “Haha, not much except over Instagram, liking posts. Yeah, I have seen what the others are doing once in a while.” 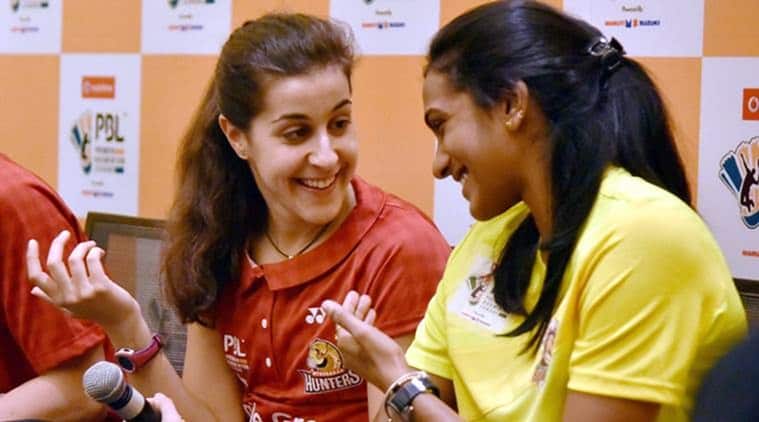 With a year’s postponement and a long layoff, Marin has resumed training now. “It will take some time before I go full steam but once the tournaments start, time shall fly.”

She’s looking forward to hosting global badminton at home when the World Championships take place at the end of next year at Huelva. “I will be playing in front of my home crowd on such a big platform for the very first time. I’ll try giving the citizens of Huelva a spectacle when they come supporting me in full attendance,” says the one-woman Spanish Armada. She’ll look to add two more medals to be given to the doctors to remember their services in this forgettable nightmare of a year.