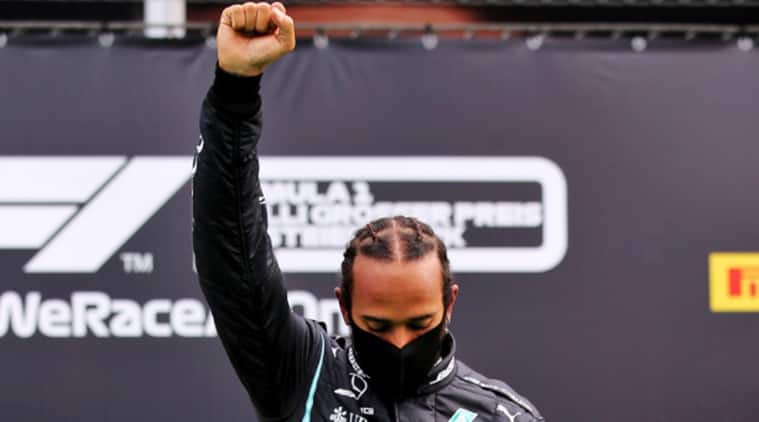 Lewis Hamilton raised a clenched fist on the podium of the Styrian GP on Sunday, evoking images of the act by Tommie Smith and John Carlos at the 1968 Olympic Games, one of the most recognised images of protest in sports.

Following the race, he urged Formula 1 teams to put in more effort to show a better coordinated show of support to the Black Lives Matter movement, like other sports have done.

We stand together ✊? the team today took the knee which was just amazing to see that together we can learn and be open minded of what’s going on in the world. Thank you to everyone in my team and to you #TeamLH, I appreciate all of your support and your positive messages ?? pic.twitter.com/zfKGdjDjce

Talking about his Mercedes team, Hamilton said: “We are so united. You can see this on grid when the whole team took a knee. I didn’t see it. I was told just before the race that they were going to do it.

“It’s not something I asked for, but it was a beautiful thing. It doesn’t take a lot to do and maybe its not changing the world, but it is hopefully changing perceptions and shifting ideals.”

Mercedes’ Lewis Hamilton raises his fist on the podium after winning the F1 Steiermark Grand Prix in Styria, Austria. More of our top sports photos of the week: https://t.co/AJUtzj6fBw ? Leonhard Foeger pic.twitter.com/spuVDpCCzA

However, Hamilton also said some other teams, like Ferrari, were not doing enough to support the fight against racism.

“Red Bull mechanics have taken a knee, but if you look at Ferrari they have thousands of people working for them, but I have heard no word of Ferrari saying that they hold themselves accountable, and what they are going to do in the future,” he told Sky Sports.

READ | When sport aligns with dissent

Before Sunday’s race, F1 drivers took a knee for the second consecutive weekend, but at least four drivers did not and some others were absent. Some of the drivers who did not take a knee last Sunday, like Sebastian Vettel, had explained that the act may be seen as controversial in some countries.