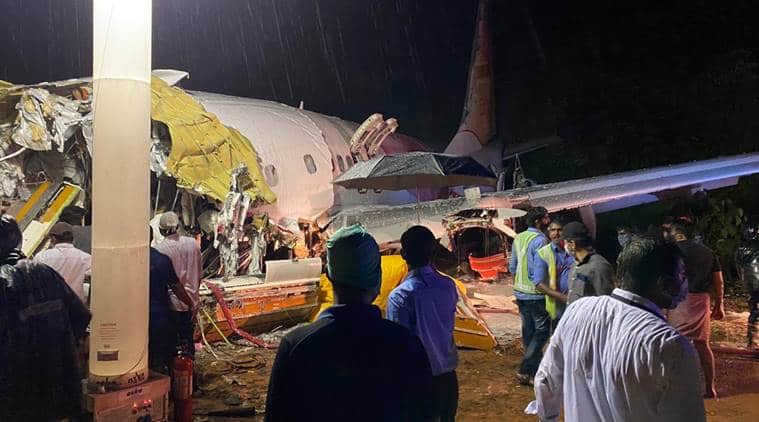 Kerala plane crash: Preliminary images from the accident site show the aircraft split into two pieces, with debris all over the area, which is reportedly just below the runway

At least 17 persons, including a pilot, have been killed as an Air India Express aircraft skidded off the tabletop runway and fell into a valley — and broke into two pieces — while attempting to land at Kerala’s Kozhikode airport late Friday evening. The flight — IX 1344 — was attempting to land at the airport around 7.40 pm amid heavy rainfall and fell off the runway, to a slip road 34 feet below. Early images from the accident site show the aircraft debris all over the area.

Prime Minister Narendra Modi tweeted that he was “pained” by the accident and said he has also spoken to Kerala Chief Minister Pinarayi Vijayan. “Pained by the plane accident in Kozhikode. My thoughts are with those who lost their loved ones. May the injured recover at the earliest. Spoke to Kerala CM regarding the situation. Authorities are at the spot, providing all assistance to the affected,” the prime minister tweeted.

Kerala CM Pinarayi Vijayan said officials have been directed to make the necessary arrangements for rescue operations. “I have instructed the police and the fire force to take urgent action in the wake of the plane crash at the Kozhikode International airport (CCJ) in Karipur. Have also directed the officials to make necessary arrangements for rescue and medical support,” the Chief Minister said. Kerala Health Minister K K Shailaja said the injured have been rushed to hospitals in Kozhikode and Malappuram. She said some of the injured are in a critical state, especially at the Kozhikode Medical College.

Home Minister Amit Shah said he was “distressed” about the crash and has instructed NDRF to reach the site at the earliest and assist with the rescue operations.

Congress leader Rahul Gandhi, who is also the MP from Kerala’s Wayanad district, tweeted, “Shocked at the devastating news of the plane mishap in Kozhikode. Deepest condolences to the friends and family of those who died in this accident. Prayers for the speedy recovery of the injured.”

Thiruvananthapuram MP and Congress leader Shashi Tharoor called it a “tragic day” for Kerala. ” First the deaths in Munnar & now this: I hear both pilots have died. Hope rescue efforts will succeed in saving all the passengers,” he tweeted. Torrential rainfall has battered Kerala, killing 15 people in Munnar.