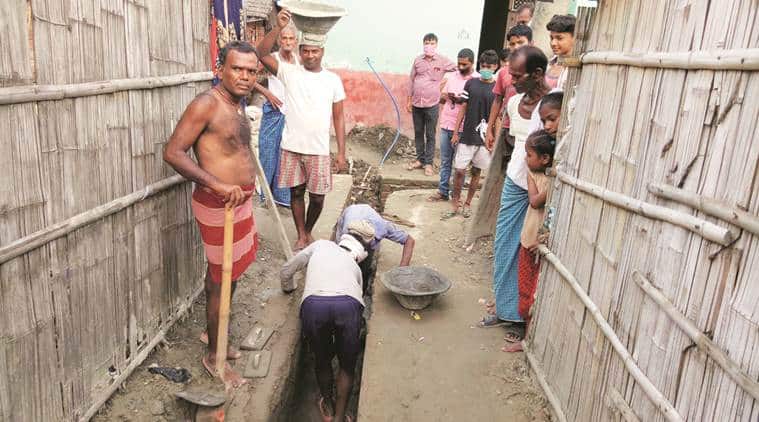 Launched from Khagaria, Bihar, on June 20 by Prime Minister Narendra Modi, the Pradhan Mantri Garib Kalyan Abhiyan, a 125-day skill-based employment scheme, seems to have had little to offer to the people of Alauli so far.

Brajesh Kumar, now back at his village — Haripur, in Alauli, is working under MGNREGA, and also taking any other odd job that comes his way. The 18-year-old worked at a blade factory in Kasganj, Uttar Pradesh, and earned Rs 11,000 per month until two months ago, before he returned to Haripur during the lockdown. He had moved to Kasganj after finishing Class X last year.

“I have learnt my lockdown lesson,” Brajesh said. “These small works with little income cannot hold back workers in Bihar for long. I want to resume my studies and undergo a professional course for better job opportunities.”

He said his friends Diljit and Rajkumar also got 14 days’ work with the MNREGA project, but that came before the launch of the national campaign last month.

The Indian Express carried out random sampling of the campaign’s progress at Haripur, Meghauna and Sahasi — all under Alauli, one of the least-developed blocks of Khagaria district.

At Haripur, there was no trace of any worker at a 565-foot proposed brick-soling site. “Around 100 workers, including 20 migrants, are engaged with the projects but the rain has kept them away for three days,” Alauli’s MNREGA programme officer, Ramekbal Pandit, said, when The Indian Express went there over the weekend. Pandit struggled to give account of work generated after the launch of PM Garib Kalyan Abhiyan.

Kumar also said, “49 per cent of its (project) cost goes as labour charge. Six people got jobs for 20 plus days.”

However, one of the two cowsheds he counted — a project worth Rs 1.33 lakh built at the house of Mahavir Yadav — was completed much before the launch of the ambitious national campaign, according to Mahavir, who also worked for 14 days and is yet to receive his wages.

Under MGNREGA, a worker gets Rs 177 per day for this.

Mahavir owns two bighas and lives by wheat and maize grown on the land. He would have left for work outside, but for the virus, he said. The family, he said, has seen hundreds of migrants return to the village since the nationwide lockdown was imposed on March 25.

At the same village, the cowshed of Ram Daresh Yadav lay incomplete, with no trace of work visible. The tin shade is yet to be put in place. Ram Daresh’s wife Gudiya Devi said: “Work has stopped for some days. My husband also worked (here) along with some migrant workers. My husband has returned from Delhi, where he worked as a labourer in the grocery market.”

Programme officer Pandit could not explain why they could not resume work.

Of the places The Indian Express visited, some evidence of good work generation was seen under the Gali-Nali scheme of the state government’s Saat Nischay programme at Dalan Haripur village, under Haripur panchayat. The 1,4,00-foot lane in the middle of the village road had been completed half way. Its plaster and cemented cover plates have to be readied.

Around 25 workers have been engaged for this at a daily wage of Rs 300. The project has engaged 15 migrant workers.

Banarasi Singh, who has returned from Delhi, said: “I earned Rs 1,000 daily by carrying grain bags. Here, I get Rs 300 daily. We are getting some work but the question is for how long…. But we are happy to get some work at home during these Covid-19 times.”

Meto Singh, who used to work at Azadpur Mandi in Delhi, said to be Asia’s largest wholesale market, said they would stay home until October or November and then decide whether to go back to to big cities for work.

Meghauna panchayat has seen no new employment drive since the launch of the PM employment scheme. Alauli has 21 panchayats but barely 10 have so far started some works under the ambitious campaign.

Alauli Block Development Officer Ajeet Kumar said: “So far we have three projects for the entire block: construction of 21 community toilets, which means 30 work days for daily wages of Rs 300, with half the work going to migrants; construction of 3,000 houses, (which is) a good employment spinner; and MGNREGA work here and there. Besides, there will be tree plantation drive”.

Khagaria District Magistrate Alok Ranjan Ghosh said: “Of 1.63,427 man-days (of work) created since the launch of the scheme until July 6, 36,983 man-days were created for migrant workers. Besides, 27 people were given bee-keeping work and 65 people got sanitary complex work. There are 27 agriculture loan beneficiaries.”