I do not do anything halfway: Edge on what made Royal Rumble so challenging

At Royal Rumble, WWE superstar Edge outlasted 29 other men to win his second Royal Rumble. Eleven years to the day after winning the 2010 Royal Rumble Match, Edge once again returned to the top, thus writing a remarkable new chapter in what can be probably deemed as one of the most incredible comeback stories.

Not only was it the WWE Hall of Famer’s first match since tearing his triceps against Randy Orton seven months ago, but Edge was also operating from the extreme disadvantage of entering at No. 1. From there he went on to be the last man standing, thus securing his path to Wrestlemania 2021.

2021. How it started. How it’s going. pic.twitter.com/zPlafkSzv3

Reflecting on his monumental effort, the 47-year-old said, “What this injury has provided is a story where 11 years to the day after I won the Royal Rumble, I win it again. You can’t plan that and I didn’t realize that until fans pointed it out on social media.

“You can’t write some of this stuff and then when it gets filtered into stories, that is when the best thing happens.”

“Now I am refocused and reset on my goals and I know where I want to get to.”

However, the road to return has been arduous and challenging.

“It was taxing but if there is one thing about me you know, that is, I do not do anything halfway. You know my first proper match at Backlash against Orton lasted 50 minutes. Again first night back after tearing my triceps, I am in the ring for an hour. The following night, I am in the ring for half an hour. So you can understand how it is,” Adam Copeland, currently signed to WWE under the ring name Edge, told the Indian Express.

But I pay for it and often end up being sore. But I have been sorer. When I think about the surgeries I have had, I feel like I should feel worse than I probably do (laughs). So it can’t be that bad right,” he added.

The other standout moment in the Rumble for Edge and his overall story was the return of former tag partner and best friend Christian, real name Jay Reso, during the match.

“Here is where wrestling can work at its purest best level when you have reality and truth. Real emotions that can’t be scripted. The look on my face seeing Christian walk down the ramp was instantaneous. There were a lot of emotions at that moment,” he recalled fondly. 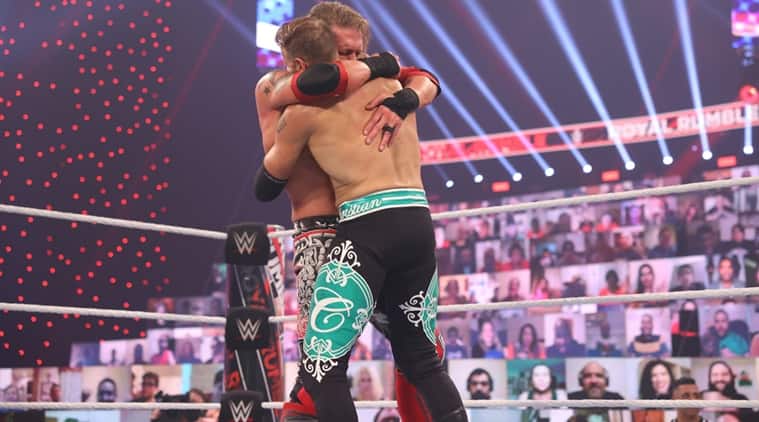 Edge and Christian at the Royal Rumble. (WWE)

Meanwhile, Edge said he wouldn’t make his WrestleMania decision until after WWE Elimination Chamber; Edge shut down The Miz.

After winning the 2021 Royal Rumble Match, Edge spent last week traveling to Raw, NXT and SmackDown as he contemplated which world World Champion he will face at WrestleMania.

With the announcement of the WWE Championship Elimination Chamber Match, The Rated-R Superstar informed the WWE Universe that he won’t make his decision on which World Champion he will face at WrestleMania until after the WWE Title is decided.

“It’s a wide-open plain field and we can go any direction we want and that is what makes it even more special for me,” he signed off.