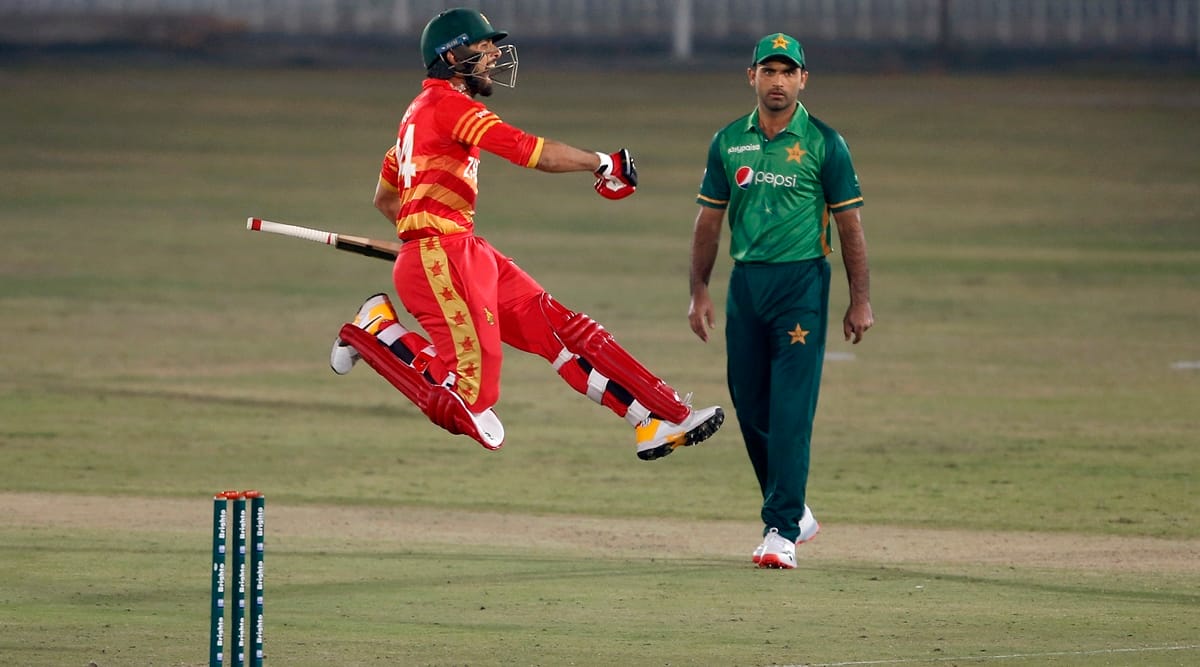 Zimbabwe’s batsman Sikandar Raza, in red, jumps to celebrate after playing the winning shot in super over. (AP)

Zimbabwe ended a 10-match losing streak by beating Pakistan in a super over to cap a thrilling third and final one-day international on Tuesday.

Blessing Muzarabani grabbed two wickets off four balls in the super over as Pakistan scored only two runs off the tall fast bowler.

Pakistan No. 10 batsman Mohammad Musa hit a four off the last ball of their 50-over innings against paceman Richard Ngarava to tie the scores as Pakistan ended up at 278-9. Zimbabwe made 278-6.

Captain Babar Azam’s run-a-ball 125 lifted Pakistan close to the target in a century stand with Wahab Riaz, who scored 52 off 55 balls.

But Muzarabani’s 5-49 included the wickets of Afridi and Babar off his last two deliveries to turn the game before Musa hit the last-ball ball boundary through covers off Richard Ngarava and forced a super over.

“This win is huge for us,” Williams said. “A lot of people do panic under pressure, but I feel we deserved to win … we are tired of getting beaten, it’s way too long.”

Ngarava struck in his first two overs of Pakistan’s chase by claiming the wickets of Fakhar Zaman, playing his first game of the series, and young Haider Ali.

Paceman Donald Tiripano grabbed his first opportunity in the series when he dismissed Mohammad Rizwan and Iftikhar Ahmed as Pakistan slipped to 88-5 in the 18th over.

But Babar revived the chase by adding 63 runs with debutant Khushdil Shah (33) and then 100 runs with Riaz until the skipper gloved a sharp bouncer off Muzarabani in the penultimate over.

“I am sad that I couldn’t finish the game after I established a partnership with Wahab, but we have learnt a lot from today’s defeat,” Babar said.

Hasnain, playing his first ODI after more than a year, rattled Zimbabwe’s top order. Captain Chamu Chibhabha, who won his second successive toss, was out for a duck to end the three-match series with only 19 runs combined.

But Williams shared three half-century stands and profited from dropped catches. Hasnain could have got rid of Williams in his last over but Musa dropped a sitter at third man.

Williams added 84 runs with Brendan Taylor (56)who was caught at mid-off to give Hasnain his five-wicket haul.

Pakistan’s lone spinner, Ahmed, who grabbed five wickets in the second game, was also off color and ended up with 0-60.

The 2-1 victory gave Pakistan 20 points in the World Super League while Zimbabwe earned 10 points. The top seven teams out of 13 nations participating in the league will get automatic qualification for the 2023 Cricket World Cup in India.