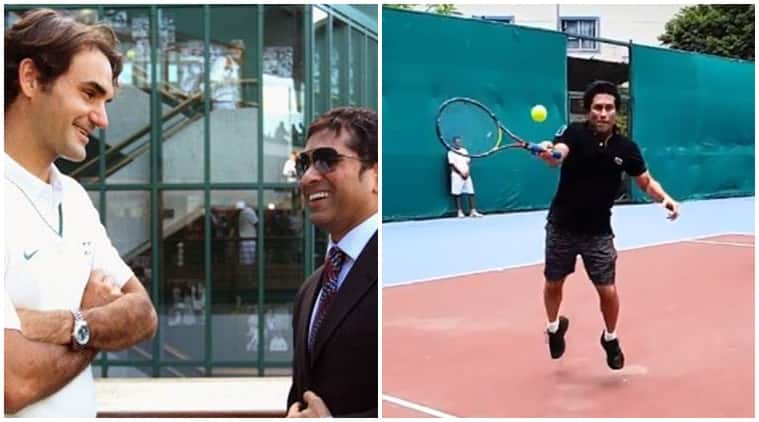 Indian batting legend Sachin Tendulkar, who is known to share a cordial relationship with Roger Federer, recently shared a throwback video of himself playing tennis, asking the tennis great for tips for his forehand.

Sachin posted a short video of himself playing a forehand, and tagged Wimbledon, saying, “Hey Roger Federer! Any tips for my forehand?”

Any tips for my forehand? ??@Wimbledon #FlashbackFriday #Wimbledon pic.twitter.com/bY4QETHRDx

Sachin and Federer have been arguably the best in their respective games and the two have expressed their admiration for each other many times in public. “I think Roger, as a sportsman and a tennis player, is something which the whole world admires. But I know Roger personally and I admire him more as a person. I think he is a very down to earth and humble man. It’s always nice to be around him,” Sachin had said.

Tendulkar has confessed on many occasions that he is a fan of Federer and is a regular at the All England Club when The Championships are held.

According to reports, the two met each other in 2011 for the first time and have been good friends since then. While Sachin attended Federer’s Wimbledon final, the tennis star invited him for his IPTL match against Rafael Nadal in New Delhi.

“Sachin Tendulkar is the Indian sportsperson I admire the most. I met him when he visited Wimbledon. He was a lot of fun to talk to – and he is a legend. Whenever I play cricket video games, I always pick Sachin as my batsman,” Federer had said.

Nothing ever stopped me from playing sports. Not even when I didn’t have my shoes on. @AustralianOpen#ThrowbackThursday #TBT pic.twitter.com/RkAegtC7P2

The right-handed batsman retired from the international arena in 2014, after 25 years of playing cricket.