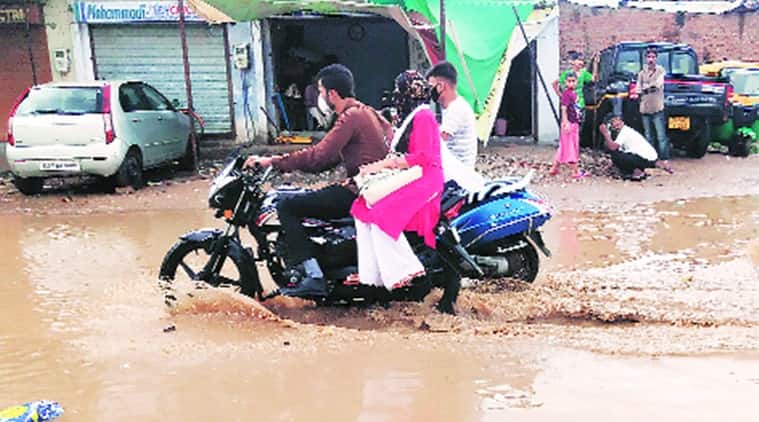 A waterlogged street in Makarba area of Ahmedabad on Wednesday. (Photo by Javed Raja)

TWO PERSONS were killed after they came in contact with an electric cable which fell to the ground after electric poles fell in heavy rain in Devbhoomi Dwarka on Tuesday night.

The Khambaliya taluka of Devbhoomi Dwarka district, which recorded incessant rain for the last few days, has received 183 per cent of the season’s average rainfall. Devbhoomi Dwarka district has received 145.16 per cent of the average rainfall, till Wednesday, especially in the last five days when all the major 16 dams in the district have also started overflowing.

Though the flood situation improved in the district on Wednesday as it stopped raining and floodwaters started receding from many areas but around 200 people continue to remain in temporary shelters.

“Two persons were electrocuted after coming in contact with a power distribution line cable which fell on the ground following heavy rain in Kalyapur taluka,” District Collector Narander Kumar Meena told The Indian Express on Wednesday.

These are first deaths in the latest spell of extremely heavy rains in the district which began four days ago. Parts of Dwarka town and villages near coastal town Okha were inundated till Wednesday evening even as rains stopped in the afternoon. Bhadrakali area, ISCON gate and Rabari gate areas of Dwarka were under waist-deep floodwaters while dozens of houses in low-lying areas in Rupen Harbour on the outskirts of Dwarka town also remained flooded.

Villages around Okha town, including Surajkaradi also had flooding till Wednesday.

But Meena said that the situation was improving fast. “We had shifted around 200 people living in low-lying areas of Dwarka taluka to safer places on Tuesday evening as heavy rains continued. Around 10 villages in Kalyanpur taluka were cut off from the rest of the district for around eight hours as they were surrounded by floodwaters on Tuesday evening. But the situation is improving. Khambhaliya taluka hasn’t received any rain since Tuesday evening and it stopped raining in Dwarka also on Wednesday morning. The rainwaters are fast receding,” he said.

The collector added that power supply to around 40 villages was restored since Tuesday evening and vehicular traffic on most of the roads in the district was also returning to normal. “However, around 20 villages are still without power and efforts are made to repair power lines. Similarly, a section of state highway connecting Kalyanpur to Raval is closed for traffic as it is still under water,” Meena said, adding some crop loss in the district is also feared due to continuous flooding in fields for the past four days.

Meanwhile, one of the three persons who had gone missing after their car was washed away in a flooded river near Sarapda village in Padadhari taluka of Rajkot district was found dead. But the two other remained missing even as rescue operation continued. The man who was washed away in Khokhaddadi River in Rajkot on Sunday was also found dead.

Kutch and Saurashtra region have crossed 68 and 55 per cent of the season’s average rainfall, respectively.

Six talukas in Saurashtra and one in Kutch have already crossed 100 per cent of their average rainfall.

Mandvi in Kutch recorded 145 per cent while in Sauras-htra, apart from Khambaliya taluka, Devbhumi Dwarka’s Kalyanpur, Dwarka and Bhanvad talukas have recorded 138, 147 and 108 per cent average rainfall respectively.

On Wednesday too, the southwest monsoon was vigorous over Saurashtra and Kutch as heavy rainfall occurred in Junagadh, Jamnagar, Porbandar and Kutch districts. Also, heavy rainfall was recorded from southern districts of Surat, Valsad and Bharuch.

The India Meteorological Department (IMD) has issued a warning of heavy rain in the districts of Saurashtra and Kutch including Gir Somnath, Junagadh, Jamnagar, Dwarka and Kutch on Thursday.