Govt to announce scheme to boost output of 41 bulk drugs 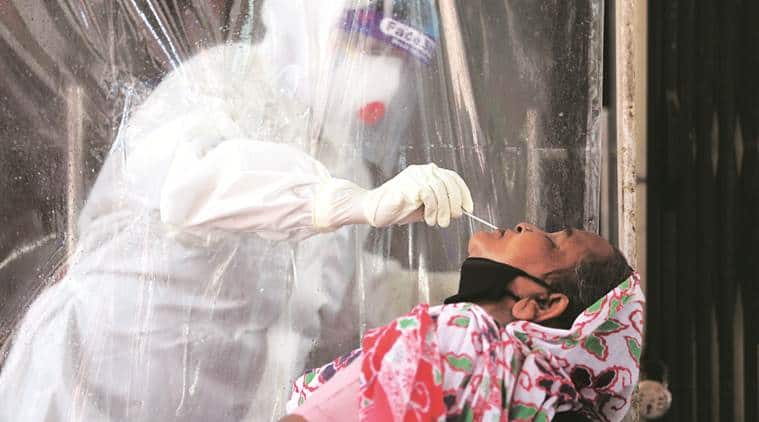 Testing for Covid-19 in New Delhi on Wednesday. The bulk drugs under this scheme include antibiotics, ingredients for lifesaving TB and heart drugs like penicillin-G, vitamin B1, prednisolone and diclofenac sodium. (Express photo by Tashi Tobgyal)

The government is set to announce the contours of a scheme to boost the production of 41 bulk drugs — ranging from antibiotics to ingredients for lifesaving TB and heart drugs like penicillin-G, vitamin B1, prednisolone and diclofenac sodium. The scheme, coming at a time when India’s dependence on China for crucial medicine ingredients has come under the scanner, is being finalised this week, The Indian Express has learnt.

A technical committee set up to outline the details of the Rs 6,940-crore Production-Linked Incentive (PLI) scheme, first announced by the Union Cabinet in March, is learnt to have submitted its final draft to the Department of Pharmaceuticals last week. The department is currently working to bring the guidelines out “as soon as possible”, so that firms can set up capacity to churn out these key ingredients, a senior government official directly aware of the development told The Indian Express. Under this scheme, the government will pay drugmakers 10-20 per cent of their annual turnover for making and selling these bulk drugs as an incentive, depending on the category of input. For instance, the government will pay a firm that has set up capabilities to make fermentation-based ingredient penicillin-G around 20 percent of their total annual sales of this product as an incentive.

The PLI scheme is expected to “encourage” domestic production of two categories of active pharmaceutical ingredients and key starting materials — chemical synthesis-based and and fermentation-based. Around 41 such bulk drugs have been approved under this scheme, including penicillin-G, vitamin B1, prednisolone, diclofenac sodium, valsartan and rifampicin. The scheme offers a “positive” development at a time when pharma companies have been facing difficulties with sourcing affordable bulk drugs from China, according to another senior government official. “This (scheme) aims to strengthen India’s drug security. These measures also aim to reduce forex losses and generate employment,” the official said.

China currently accounts for nearly 70 percent of India’s bulk drug imports, but the cost of several of these crucial ingredients have been on the rise lately.

“There are attractive incentives. The plan is to announce it as soon as possible, and work is going on this week to finalise the scheme,” the first official said, adding it would then have to go through processes of legal vetting and approvals from the Minister of Chemicals and Fertilizers before it is finally announced.

“This scheme will help promote self-reliance in active pharmaceutical ingredients and key starting materials. This is very important from the perspective of Atmanirbhar Bharat, Make in India and strengthening the supply chain,” said the official. Several firms have expressed “huge” interest in participating, they added.

The upper limit of the annual incentives in this scheme will be capped, however, and will vary depending on the bulk drug. These incentives will be given to the first 136 firms that receive approval and invest a minimum amount set in the guidelines, ranging from Rs 20 crore to Rs 400 crore, to set up the manufacturing capacities for these bulk drugs.

“Older companies with available land that can be used for this purpose will also be eligible for these incentives, but they will have to put in the minimum investment to create the facilities,” said one of the officials cited above.

Once announced, it is expected to take a year to set up the capabilities for chemical synthesis-based bulk drugs in India and two years for fermentation-based bulk drugs. Approval under the scheme will be granted by an empowered committee comprising secretaries of DoP, Department of Chemicals and Petrochemicals, DPIIT, Ministry of Commerce and Industry, Ministry of Environment and Ministry of Health and Family Welfare. Following the Cabinet announcement, DoP had constituted a technical committee under the chairmanship of Central Drugs Standard Control Organisation Joint Drugs Controller, Dr Eswara Reddy, to work out the details of the PLI scheme.

While work had been initiated in the last four years to reduce India’s dependence on China for pharmaceutical ingredients, industry executives earlier told The Indian Express that not much headway had been made.

However, India’s need for self reliance in bulk drugs received a major push during the Covid-19 outbreak, which had led to temporary lockdowns of several countries like China. In March, around the time that Wuhan in China was under a Covid-19 lockdown, India had even resorted to restricting exports of 13 bulk drugs and the formulations made from them. This was to safeguard India’s own stock of these ingredients, which had mostly been imported from the region.

In the last six months, the National Pharmaceutical Pricing Authority (NPPA) has also hiked the ceiling prices of over 20 essential medicines after pharmaceutical firms argued that the cost of their ingredients, mostly imported from China, had shot up.