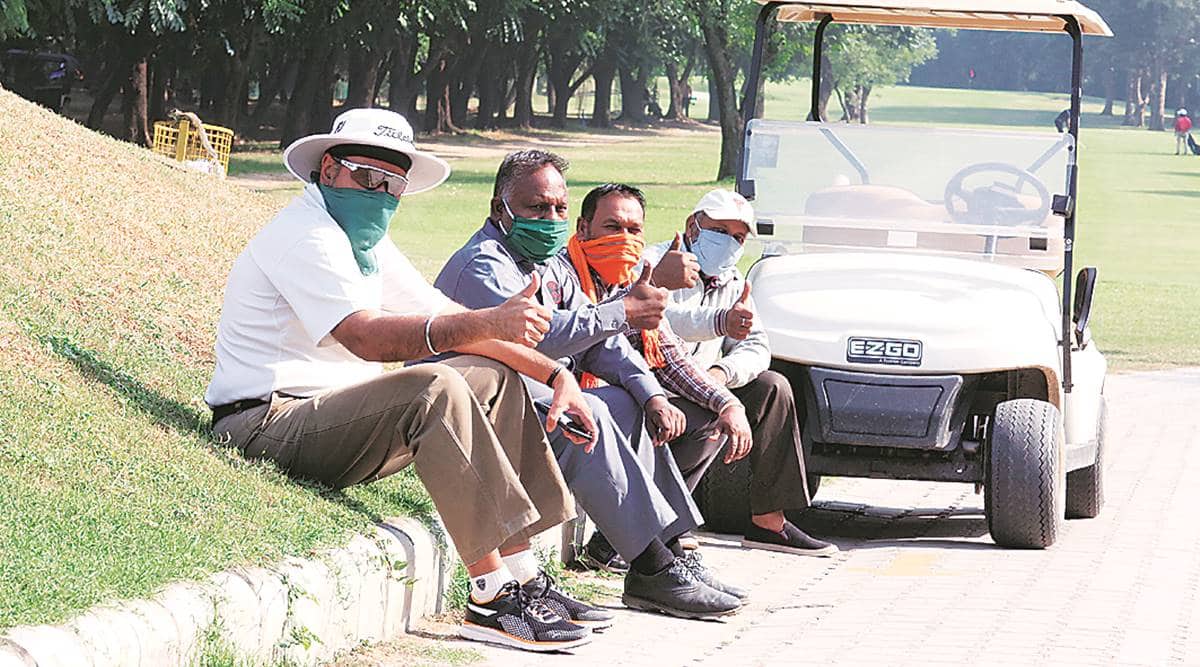 Chandigarh Course captain Amartinder and his team at the Chandigarh Golf Club on Monday. (Express photo by Jaipal Singh)

As professional golf returns in India with Panchkula Golf Club and Chandigarh Golf Club co-hosting the PGTI Players Championship starting on Wednesday, Monday saw a total of 120 golfers practicing at the two golf courses and making preparations for the tournament.

While all the golfers and their respective caddies apart from PGTI officials submitted negative PCR reports for Covid-19 on Monday, it set the ball in motion for the return of professional golf in India.

“As per the Professional Golf Tour of India (PGTI) guidelines, all the 120 golfers apart from their respective caddies, local or outstation, submitted the 72-hour PCR negative report for Covid-19 before today’s practice round. We are glad that professional golf in India in such tough times is going to restart. No player other than those mentioned in the tournament list will be allowed. There will be no golf carts allowed and caddies are not allowed to touch the pin flag and there will be no bunker rakes. We also have got ambulance service at both the courses, which will host the first two rounds simultaneously before the final two rounds are played at Panchkula,” said Uttam Singh Mundy, CEO, PGTI.

The Rs 30 lakh prize money event will be one of the five events to be played till the end of this year with the next week’s PGTI Players Championship too being co-hosted by Panchkula Golf Club and Chandigarh Golf Club (CGC) with CGC hosting the final two rounds.

The 120-player field at this week’s PGTI Players Championship includes PGTI order of merit champions Rashid Khan, Khalin Joshi and Shamim Khan apart from four-time PGTI winner Ajeetesh Sandhu. The Chandigarh challenge will also be led by Karandeep Kochhar, Akshay Sharma, Aadil Bedi, Yuvraj Sandhu and others. The 14-time international winner Jeev Milkha Singh will not be playing in the two tournaments. The 7,202-yard-course has also seen the course staff maintaining the course for play since the last six months and the tournament will also see the introduction of the new green at the 12th hole at CGC.

“During the lockdown, our course staff, who stay at the course, worked at the course for maintenance before the course reopened in May. One of the problems we faced was of Chandigarh getting late monsoon rains. The greens at the course had some fungus growth and fairy rings. The entire golf course was cured and we hired external labour to sieve the sand and fertilization was carried out. We have also renovated the green on the 12th hole with the green now being more than 50 yards from front to back. Having more pin positions will pose a new challenge to the professional golfers,” said Amritinder Singh, course manager, Chandigarh Golf Club, who will also be playing in the tournament having qualified through PGTI Q School.

The Panchkula Golf Club saw the first group of 60 professional golfers practicing on Monday and the second group will train at the club on Tuesday.

“While we were closed during the lockdown initially, the club staff has done great work in getting the course in good shape. It will be for the first time that a PGTI tournament will be played on two different 18-hole golf courses and wind will pose a different challenge for the golfers as compared to the Chandigarh Golf Club,” said AS Dhillon, general manager, Panchkula Golf Club.