From sentinel of skies to dhaba decoration, a MIG-21 finds new home 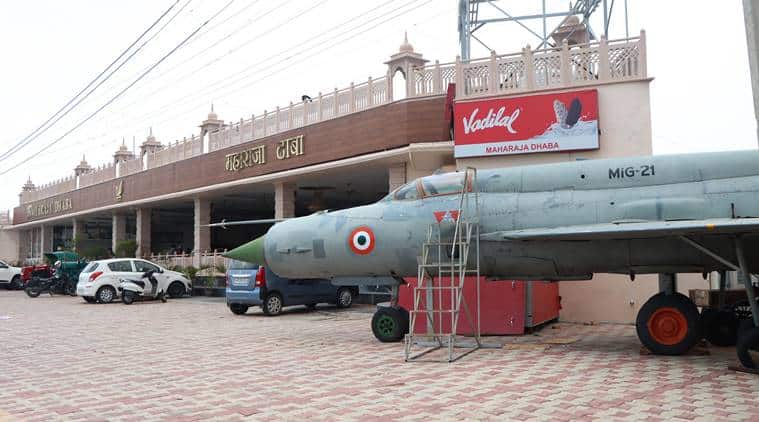 A decommissioned MIG-21 supersonic fighter aircraft, which once roared across the sky defending the borders of the nation, now stands parked outside a dhaba on a highway in Haryana.

The aircraft has been displayed in front of ‘Maharaja Dhaba’ on Rohtak-Delhi highway. Giving company to the fighter aircraft are two tractors, also put on display by the dhaba management. Near the aircraft stand parked the cars and two-wheelers of the customers.

“It attracts a lot of people. They stop their cars here especially to get selfies clicked with the aircraft in the background,” says Kamal Sodhi, manager of the dhaba, while speaking to The Indian Express. The hotel management had brought the fighter aircraft even before inauguration of the eatery in 2019.

The decommissioned aircraft retain the complete body, but the engine is removed. According to Sodhi, the aircraft was purchased during an auction held in Pathankot in Punjab. “It was brought here in a trailer-truck after being dismantled into a few pieces. Otherwise it would have created problems in the normal movement of the traffic. It was reassemble at the dhaba site,” says Sodhi.

A supersonic fighter jet and interceptor aircraft, MiG-21 was designed by the erstwhile Soviet Union, which began its manufacturing in the 1950s. It still has a reputation as one of the world’s best fighter jet. India reportedly has 100-odd upgraded MIG-21 aircraft in its fleet.

IAF officers say that a decommissioned aircraft sold as scrap is not expected to be in complete shape and form as is the one displayed at the dhaba. This aircraft seemingly looks complete though the undercarriage appears to have been put with some local modification.

“There is a long waiting list of educational institutions and training institutions that have applied for decommissioned fighter aircraft for putting it up on display. Only badly damaged aircraft are meant to be sold as scrap in parts and not as a whole. Tenders are floated for this exercise,” said Air Marshal M Matheswaran (retd), a former Deputy Chief of Integrated Defence Staff and a former fighter pilot himself.

The management of ‘Maharaja Dhaba’ has not limited their interest to only an aircraft. They have displayed old tractors and cars too. The hotel manager says they brought an Austin 7, an economy car manufactured by the Austin Motor Company in the United Kingdom from 1922 until 1939, from Hyderabad.

As showpieces, according to Sodhi, the dhaba has tractors like Angad and DT-14, which were brought from Delhi. A vintage tractor from Russia, DT- 14 was used extensively in the 1960s and 70s at the time of the Green Revolution in India. “When the then Haryana cabinet minister Manish Grover reached to inaugurate the dhaba last year, he was given a ride in the car as well as on the tractors,” recalled Sodhi.