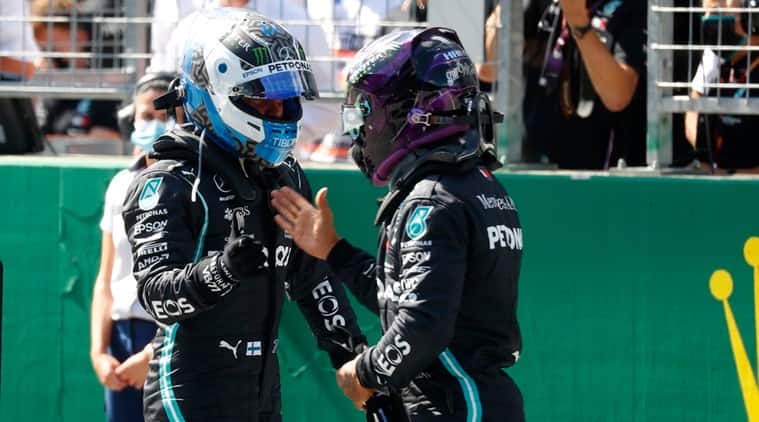 The race was interrupted three times by a safety car and nine of 20 drivers abandoned, including both Red Bulls of Max Verstappen and Alexander Albon — who tried to overtake Hamilton on the outside with 10 laps left, touched wheels and flew off track.

Hamilton was given a five-second time penalty for causing the collision, having earlier been hit with a three-place grid penalty after an incident in Saturday’s qualifying was reviewed by stewards.

Although Bottas started from pole position and Hamilton from fifth, it looked like a straight fight between the two Mercedes drivers as has been the case so often in recent years.

The Mercedes duo of Bottas and Hamilton enjoyed a comfortable performance advantage throughout the 71-lap encounter. But with 10 laps to go, the race exploded into life, with Hamilton handed his penalty.

Formula One drivers all wore a black T-shirt with ‘End Racism’ written on it before the start of the season-opening Austrian Grand Prix on Sunday, but six of the 20 drivers did not take the knee.

Kimi Raikkonen, Max Verstappen, Charles Leclerc, Daniil Kvyat, Antonio Giovinazzi and Carlos Sainz Jr. were those who did not.

World champion Lewis Hamilton, the only black driver in F1, wore a T-shirt with Black Lives Matter on the front and End Racism on the back.

Hamilton, who knelt alongside Sebastian Vettel, at one point bowed his head pensively while Kvyat pointed to the anti-racism message on his T-shirt.