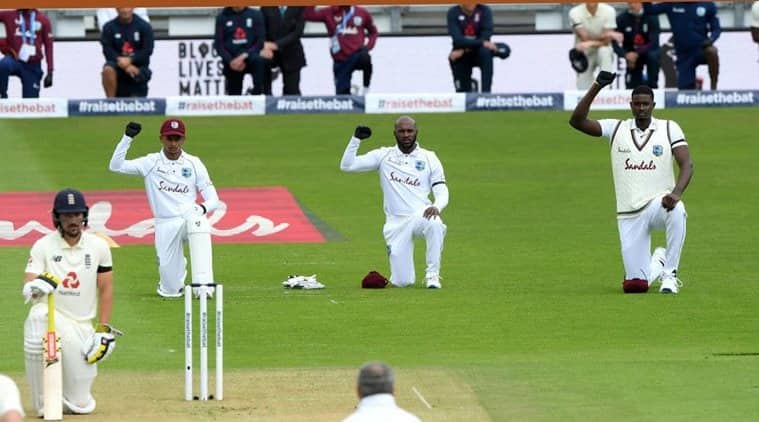 West Indies and England players take a knee at the start of first Test at Southampton (Source: ECB)

Cricket fans from across the world watched as England and West Indies players took a knee in support of the Black Lives Matter movement before the start of play at Southampton as international cricket returned after a four-month absence. (Live Score)

The long absence of cricket became longer when rain delayed toss on Day 1 of the first of the three-match Test series. But when the cricketers of both sides came out on the field, moments before the first ball was bowled, they knelt in support of the ongoing movement that saw widespread protests across the world after the killing of George Floyd in the United States in Mayu.

Along with that, the players also supported a Black Lives Matter logo on the collars of their white Test uniforms.

#ENGvWI Just before the start of play, our #MenInMaroon took a knee to show their solidarity against Racism with the Black Lives Matter movement. ??????#BlackLivesMatter pic.twitter.com/HQ63Q6T3yM

Earlier in the day, former Windies pacer Michael Holding gave a strong, anti-racism testimony while waiting for the match to begin.

With the slow and restricted restart of sporting activities in Europe, the kneeling gesture has been seen across sports with many renowned athletes coming forward to speak against racism. It has been observed in the Premier League, F1, LaLiga as well as Serie A.