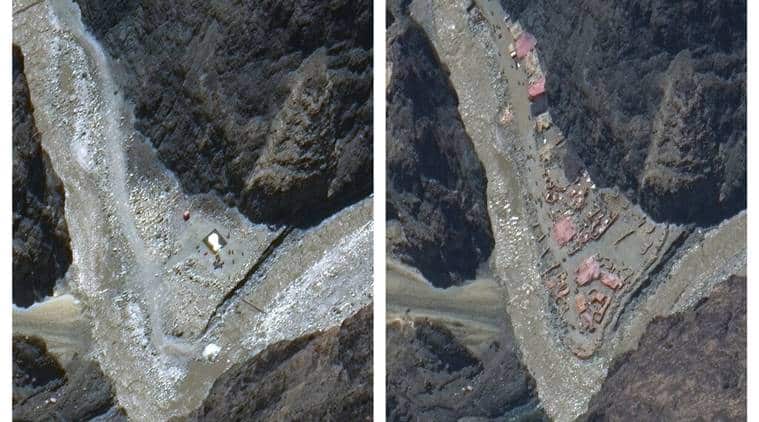 This combination of May 22, 2020, left, and June 23 satellite images provided by Maxar Technologies shows construction in the Galwan river valley. (AP)

Continuing the slow process of disengagement on the Line of Actual Control, Chinese and Indian troops Wednesday stepped back from another friction point in Ladakh as both sides prepared for more meetings at the diplomatic and military levels for the next steps to resolve the border situation.

A senior Army officer told The Indian Express that troops from both sides moved back by around 2 km from the standoff site at PP15 in the Hot Springs sector, after the remaining tents there were dismantled by Chinese soldiers and taken back in vehicles.

A security establishment officer said the withdrawal was done according to the disengagement formula used at PP 14.

“The progress is good. Both forces are moving back with vehicles and structures. The target was set for this evening and it appears it is going to be achieved.

Read| Galwan to now: How India and China lowered the rhetoric

A verification will happen tomorrow to completely assess the progress,” the officer said.
“Here too, the forces will move back 1.8-2 km and then follow the 30-50 formula for assembly of soldiers further back. There will be no patrolling until further orders. The progress has been good since the Special Representative-level talks between the two countries,” he said.

According to the senior Army officer, some depletion in the strength of soldiers was observed Wednesday at the third major standoff site at PP17A in Gogra, but both sides continued to be in an eyeball-to-eyeball situation there. It is expected, the officer said, that the rearward movement at PP17A “could be completed in a day or two”.

Disengagement process| Why Army is cautious, will verify each step on the ground before taking next

There has been limited rearward movement by Chinese troops, the officer said, in the contentious Pangong Tso area, where they have come in around 8 km, west of Finger 8 which India says marks the LAC.

On Wednesday, some vehicles, tents and troops moved back from Finger 4 towards Finger 5 on the north bank of the saltwater lake, but there was no change in Chinese positions at Finger 4 on the ridgeline.

Fingers are mountainous spurs jutting out of the Sirijap ridge on the north bank of the lake, and the Chinese side has undertaken massive construction on the bank and the ridge in the last seven weeks. There are three Chinese observation posts (OPs) on the forward slope of the Finger 4 ridge overlooking the Indian base, which remain in place even now.

Read| Congress digs out PM Modi’s 2013 tweet on India-China: ‘Why Indian soldiers were withdrawn from own land’

A second officer said that following the completion of the initial step of disengagement at various standoff sites, another meeting of the Working Mechanism for Consultation & Coordination on India-China Border Affairs (WMCC) is likely to be held this week.

It will be followed by another round of talks at the level of the Corps Commander to finalise the next step of disengagement.

The second officer also struck a note of caution about the disengagement process so far, stating that China had massed more than two divisions all along the LAC in the Ladakh sector. Moreover, it has the capacity to bring in more troops and equipment to the border within three to four days.

These soldiers and equipment, the officer said, continue to remain deployed at the LAC. “Some 40,000 of them have come from 2,000 km away, and 400 have moved back by 2 km,” he said. This demands a matching level of alertness and preparedness from the Indian side “as intentions can change quickly and we have to go by the capability they have,” the officer said.

During the period of no-patrolling, another officer said, “both sides assure each other about rearward movement through the military hotline in the region”.