Congress digs out PM Modi’s 2013 tweet on India-China: ‘Why Indian soldiers were withdrawn from own land’ 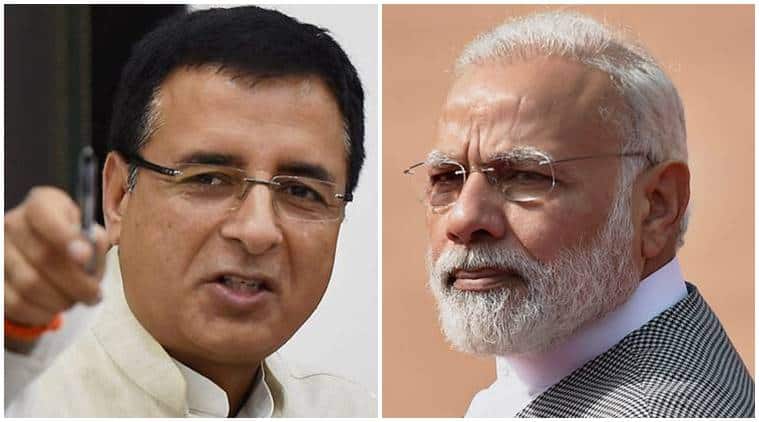 The Congress Wednesday dug out an old tweet of Prime Minister Narendra Modi to hit out at the Bharatiya Janata Party (BJP) over the disengagement of Indian and Chinese troops along the Line of Actual Control (LAC) in eastern Ladakh.

Seeking an answer from PM Modi as to why Indian soldiers were withdrawn from their own land, Congress chief spokesperson Randeep Surjewala reminded him of his own words in 2013 during UPA’s regime

“Respected Prime Minister, do you remember your words? Do your words mean anything? Will you tell us why our forces are retracting from our land? The country seeks answers,” Surjewala tweeted.

On May 13, 2013, then Gujarat chief minister Modi had said, “China withdraws its forces but I wonder why Indian forces are withdrawing from Indian territory? Why did we retreat?”

After Modi’s tweet resurfaced, senior Congress leader Shashi Tharoor also retweeted Modi’s post and asked, “I stand with Modiji on this. PM must answer his question.”

I stand with Modiji on this. PM must answer his question! https://t.co/xauOoFONvh

On Wednesday, Congress leader Rahul Gandhi had asked the government why status quo ante was not insisted upon by New Delhi and why the territorial sovereignty of the Galwan Valley does not find mention in the government’s statement. “National interest is paramount. Government of India’s duty is to protect it. Then, Why has Status Quo Ante not been insisted on? Why is China allowed to justify the murder of 20 unarmed jawans in our territory? Why is there no mention of the territorial sovereignty of Galwan valley?” he asked on Twitter.

National interest is paramount. GOI’s duty is to protect it.

Then,
1. Why has Status Quo Ante not been insisted on?
2. Why is China allowed to justify the murder of 20 unarmed jawans in our territory?
3. Why is there no mention of the territorial sovereignty of Galwan valley? pic.twitter.com/tlxhl6IG5B

Gandhi shared the statements put out by the Indian and Chinese Foreign Ministries after the talks between Chinese Foreign Minister Wang Yi and Indian National Security Adviser Ajit Doval. He also highlighted how the Ministry of Foreign Affairs of People’s Republic of China in its statement made a mention of the Galwan Valley, but the Indian External Affairs Ministry did not do so.

Congress has been questioning the Modi government on the stand-off between India and China ever since 20 Indian soldiers were killed in a clash with Chinese troops in the Galwan valley last month.

On Saturday, Rahul Gandhi had said patriotic Ladakhis are raising their voice against Chinese intrusion and asked the government to listen to them, asserting that ignoring their warning will cost India dearly.

Patriotic Ladakhis are raising their voice against Chinese intrusion. They are screaming a warning.

For India’s sake, please listen to them. pic.twitter.com/kjxQ9QNpd2

Gandhi also shared a media report which showed some Ladakhis alleging that the Chinese have been occupying Indian territory in Ladakh. “Patriotic Ladakhis are raising their voice against Chinese intrusion. They are screaming a warning. Ignoring their warning will cost India dearly,” the former Congress president tweeted. “For India’s sake, please listen to them,” he had said.

Coming out in support of Rahul Gandhi, Chief Minister Amarinder Singh on Tuesday took strong exception to BJP president JP Nadda’s attack on Rahul over the India-China standoff issue, and trashed it as a brazen attempt to distract public attention from the Government of India’s failure in Galwan Valley.

“Rahul had been discussing the China issue with me for a long time, and had been concerned about the matter even while the Central government was vehemently denying any stand-off in Galwan,“ Amarinder Singh said.

BJP president JP Nadda had accused Rahul of demoralising the nation and questioning the valour of our armed forces.

Amid reports that the Indian and Chinese troops have started moving back at PP14 in Galwan area in first signs of disengagement between the two sides, the Congress Monday asked Prime Minister Narendra Modi to apologise to the country for his earlier statement that neither has anyone intruded into the Indian territory nor has anyone captured any military posts.

Also, as per the information till now, a day after they moved back from Patrolling Point 14 (PP14) in Galwan Valley, Chinese and Indian troops have started stepping back at PP15 and PP17A (Gogra) in the Hot Springs sector of Ladakh as part of efforts to reduce tensions along the Line of Actual Control. Senior sources in the Army said China is dismantling its structures and moving back troops at these two locations.