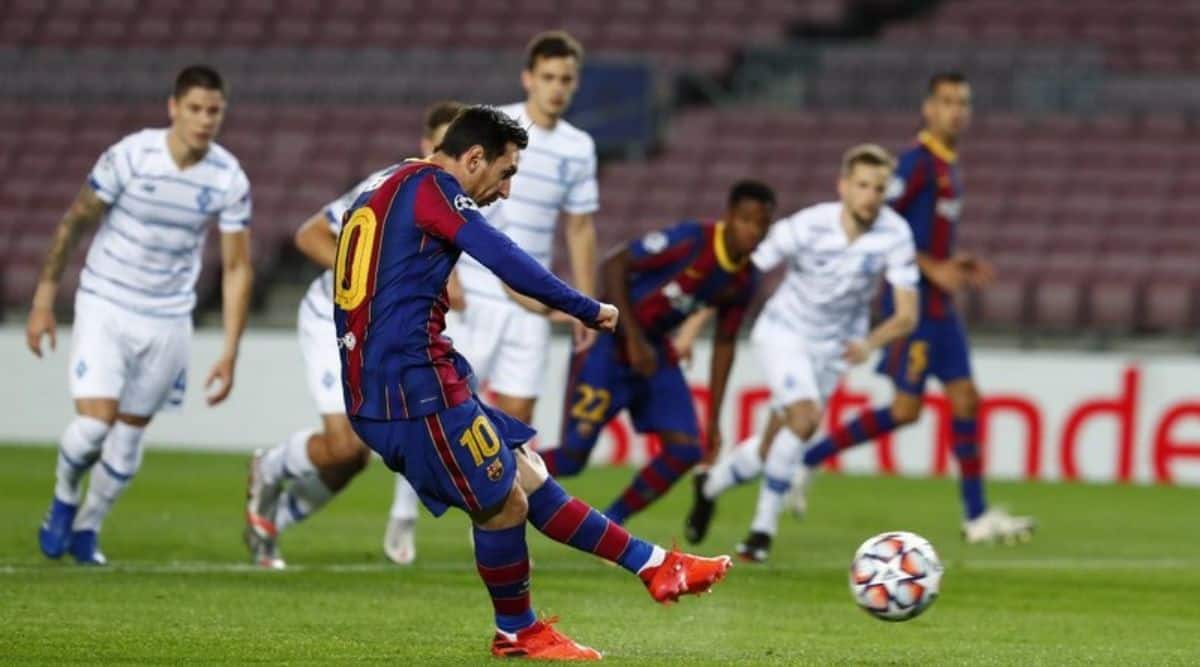 With a goal from Lionel Messi and several key saves from Marc-Andre ter Stegen, Barcelona put aside its domestic struggles to maintain a perfect record in the Champions League.

Messi converted a penalty in the fifth minute at an empty Camp Nou after he had earned a foul when he was crunched between two defenders while dribbling into the box. It was goal No. 121 for the Argentina forward in his 150th European match, including four UEFA Super Cup games.

Pique added a second goal for the Spanish hosts with a header in the 65th. Dynamo’s Viktor Tsygankov pulled one back with 15 to go.

Despite the result, the performance highlighted that coach Ronald Koeman has a lot of work to do. His team continued to squander too many chances, while its defense was brittle and needed its goalkeeper to bail it out far too many times.

Even with a team at full strength, Dynamo would not have been expected to give Barcelona much trouble at home. So, with nine players unavailable after having tested positive for the coronavirus, it looked like a perfect opportunity for Barcelona to get a convincing win after going four games without a victory in the Spanish league.

Instead, the hosts needed Ter Stegen to play at his best in his first game since recovering from surgery on his right knee in August after Barcelona suffered its 8-2 humiliation to Bayern Munich to close a season to forget.

“You could have thought it would be an easy game because they were missing players because of COVID, but they showed they are a competitive team,” Koeman said. “Once again our goalkeeper Marc was phenomenal. They created one-on-one chances against him, but again he showed he is a great goalkeeper.”

Barcelona leads Group G with nine points. Juventus has six points after Álvaro Morata scored twice in a 4-1 win at Ferencvaros. Dynamo and Ferencvaros have one point each.

Ter Stegen’s replacement Neto had played well enough in his place— until the Brazilian’s feet failed him when he tried to control a pass and gifted an easy goal in a 1-1 draw at Alavés on Saturday.

Back between the posts, Ter Stegen showed why he has long been Barcelona’s best player after Messi.

The German goalie got his arm on a header by Vitaliy Buyalskiy while going the other way to send it over his bar in the 36th. He went on to save five more quality chances for Dynamo.

“It was very important for me to win this game,” Ter Stegen said. “I was eager to get back on the field and do what I love. They had several chances, and we will have to talk about them and find how to improve, but other than that I think we played a good match.”

Dynamo coach Mircea Lucescu had quipped on Tuesday that “it would have been better to have another positive case and play the game at a later date” after his players all passed another coronavirus screen in Barcelona.

Yet the visitors held up thanks to the fine goalkeeping of 18-year-old Ruslan Neshcheret. He was playing just his second match for Dynamo’s first team, which was without its two regular ’keepers due to the pandemic.

Neshcheret could do nothing to stop Messi’s spot kick— his fourth goal of the season, all coming from penalties. He did prove up to the task to turn back multiple shots by Messi, Ansu Fati, Pedro “Pedri” González, and Ousmane Dembele.

“I was like in a fairy tale. Playing at this great stadium in such a game is a dream for any footballer,” Neshcheret said. “Were really happy to have a chance to play against such top opponents.”

Pedri came inches from adding a quick second goal after Messi scored. His volley hit the crossbar and bounced down off the goal-line only to refuse to go in.

After Neshcheret got a foot on a shot by Fati and a hand to redirect a Messi shot wide, Dynamo ventured out of its area with the speed of Gerson Rodrigues and almost equalized.

Ter Stegen rescued Barcelona twice more after the restart to foil tries by Tsygankov and Vladyslav Supryaha. Then it was Neshcheret’s turn to stretch and parry a free kick by Messi that looked certain to end up in the net.

Pique beat finally Neshcheret a second time with a header glanced in a pass from Fati.

Tsygankov got a deserved goal from a series of counterattacks that repeatedly caught Barcelona outnumbered.

“I think we deserved at least a draw, but in these circumstances I’m satisfied with my players,” Lucescu said.