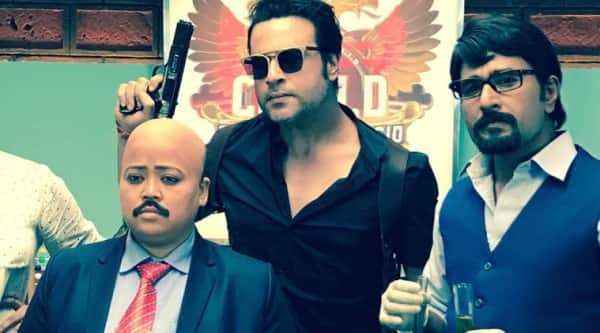 Power couple Bharti Singh and Haarsh Limbachiyaa are all set to launch a comedy show Funhit Mein Jaari on SAB TV. The series will be gag-based and have Krushna Abhishek, Srman Jain, Mubeen Saudagar and Jasmin Bhasin in the cast along with Bharti.

A source shared with indianexpress.com that the show will have the actors performing on various subjects. Each episode will have them perform a fun act. While the aforementioned celebrities have started shooting, more actors would join them in the coming days.

This is Bharti Singh and Haarsh Limbachiyaa’s second project together, after Khatra Khatra Khatra. While he would be producing and creatively handling the show, Bharti will be performing. They have already started shooting and are looking at launching the show by end of July or early next month.

The latest episode that the team shot has them donning the avatar of the CID team. Krushna Abhishek took to Instagram to share a photo which has Bharti Singh dressed as ACP Pradhyuman, Mubeen Saugagar as Dr Salunkhe, while he himself looks like a suave officer.

Along with the picture, Krushna wrote, “Shooting after sooooo long. Things have changed on set sanitizing hands after every ten minutes keeping distance with others clothes r washed in every lunch and dinner breaks staff with kits totally covered and not hanging around with us . This is our upcoming show ?funhit mein jaari.”

While Bharti Singh and Haarsh Limbachiyaa are also hosting India’s Best Dancer on Sony TV, she and Krushna Abhisek are also part of The Kapil Sharma Show. Both these shows air on Sony TV and as per latest information, the makers are yet to resume shoot.

Srman Jain, who is making a comeback to acting after a break, spoke to indianexpress.com about reuniting with Bharti and Krushna after six years. They had worked together in Comedy Classes. Jain had taken a break to try his hands at production and directing.

“While I was enjoying doing it, I was itching to get back to acting and especially comedy. Haarsh had spoken to me during Khatra but I was in London for work then. We had been in touch and when he started this project, I couldn’t have been happier to come on board. It’s so much fun to work with these guys again. I am really hoping people would enjoy our show,” he added.

Shoots for television shows resumed recently, and most would air new episodes from July 13. Amid the excitement of getting back to work, Mere Sai recently faced a major setback when one of the crew members tested positive, leading to the shoots being halted.

Talking about working amid the coronavirus pandemic, Jain shared that it does feel weird as they cannot hang out around or have their lunches together. However, he added that it’s important to follow all guidelines for the smooth functioning of the shoot.

“Working is more important right now. We do have our own fun moments on sets, while maintaining social distancing. We even have a coronavirus inspector on set, who keeps a check on all of us. Following his orders through the day is a fun moment in itself. This show will hopefully add some joy in people’s life, and we are really waiting for it to launch,” concluded Srman Jain.