Apple iPad Air 2020 review: This is a smaller iPad Pro 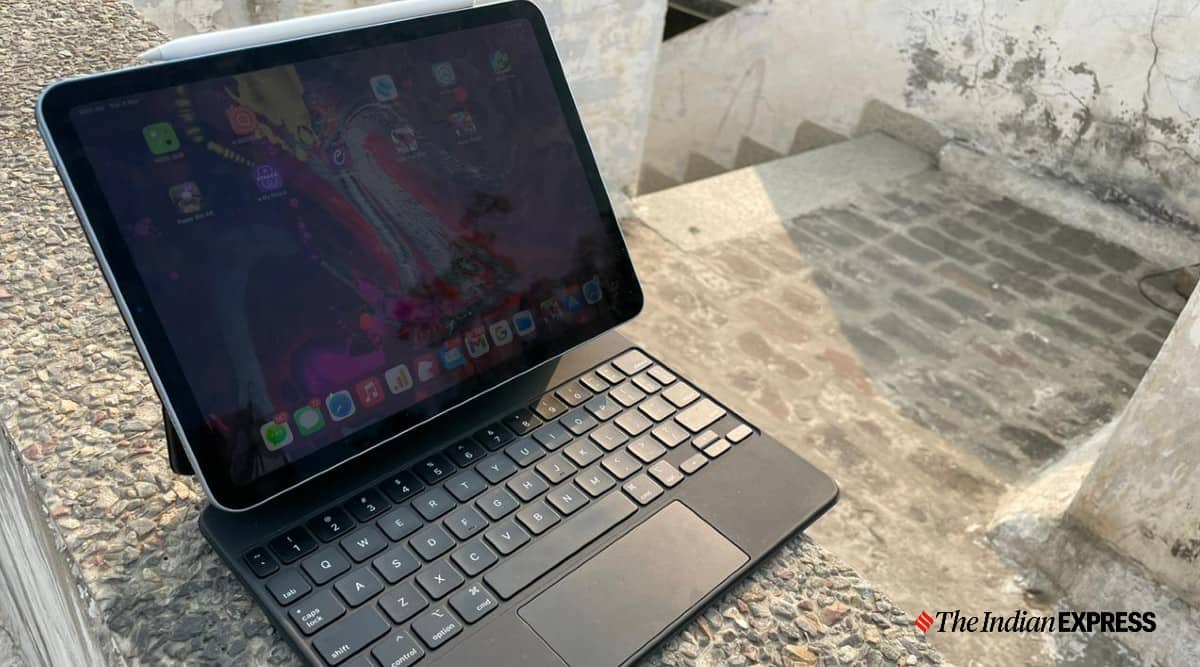 Over the last few days, my nine-year-old, who thinks gadgets are his birthright, has been taking extra interest in one of the new review devices. It is the Apple Pencil along with the new iPad Air that has caught his fancy this time. And when he is bored with the many other screens in his life at the moment, he spends more time on the iPad Air colouring his favourite characters using the Pencil. What intrigued me was the fact that he has not shown much interest before in either the Apple Pencil or the Samsung S-Pen when they have been in the home before for review. But he is more than familiar with iPads as it is his go-to device for online classes. Then it struck me why the iPad Air was getting the attention the iPad Pro or Galaxy S-Tab did not: It was way less intimidating for someone his age, and size.

In my books that is exactly what the iPad Air feels like, a very powerful tablet that is less intimidating when it comes to specs and looks. This is clearly the smaller iPad Pro, though Apple might not be calling it that.

The iPad Air is a thin piece of computing as the name suggests. It moves more towards the iPad Pro design philosophy than looking back at the earlier Air models. So there is no home button. The power button at the top also has a TouchID fingerprint scanner embedded in it, something new for Apple. There are volume buttons on the right side of this. When in horizontal orientation, the top of this iPad is where the Pencil sticks to and recharges. 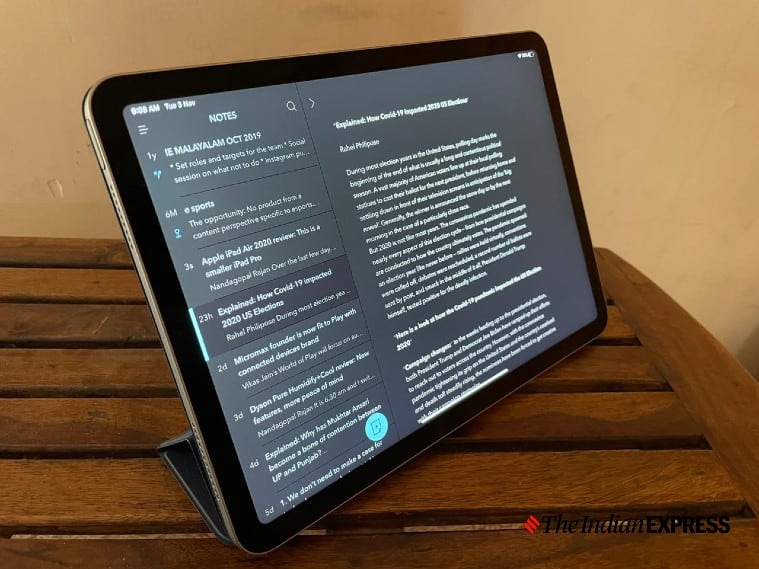 There is no home button. (Express photo: Nandagopal Rajan)

With this iPad Air, Apple is rolling out the Magic Keyboard beyond the iPad Pro lineup. This also makes the iPad Air a more functional computing device on the whole. With the new iPad OS, there is not much difference in how the tablet works when you compare it with the MacOS software. It has just been made more natural to use in a touch-first environment. And the biggest testament of this is the round cursor, which I think is way better than the flickering stick we have all been used to. Selecting text, scrolling inside smaller widgets in a page or just dragging and dropping something from one tab to the other, all rather difficult endeavours earlier, have now become really easy to do.

The 10.9-inch Liquid Retina display is sharp, vivid and fluid at the same time. Or to put it differently, it is more natural and less saturated than a lot of the displays you will see these days. And coupled with the superb audio quality, this makes the iPad Air a great consumption device. In fact, the angles of the Magic Keyboard give you the versatility to watch a Netflix show while at a cafe or on the bed. 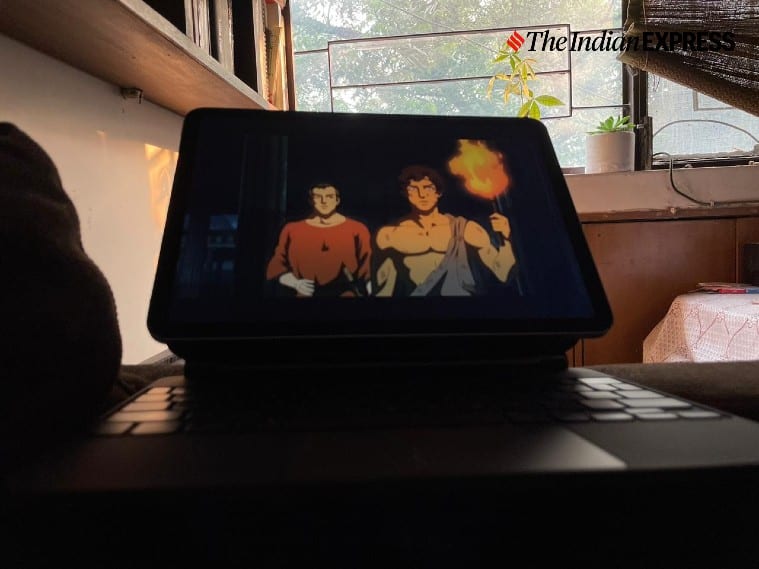 But what really differentiates the iPad Air is the new A14 Bionic processor inside. I think Apple would have really wanted to push this in the iPad Pro too, maybe the timing was not right. Anyway, the A14 Bionic is the most powerful processor Apple has ever made and a precursor to Cupertino packing its own chips inside Macs.

For over a week, I used the iPad Air as my main device for work — you can’t imagine how much of a change it is these days being able to have a small screen on your lap instead of staring at the MacBook on a makeshift work table. Stuck at home we have no option but to enjoy these small pleasures in life. And the iPad Air is indeed a pleasure to work on.

Yes, I might be an outlier, having used the iPad for work for many years now. But even for me, the transition from a large keyboard to a smaller one should not have been this easy. But I think the size is perfect for those who want to write. In fact, I did a whole lot of editing also using the Air, made easier by the keyboard. 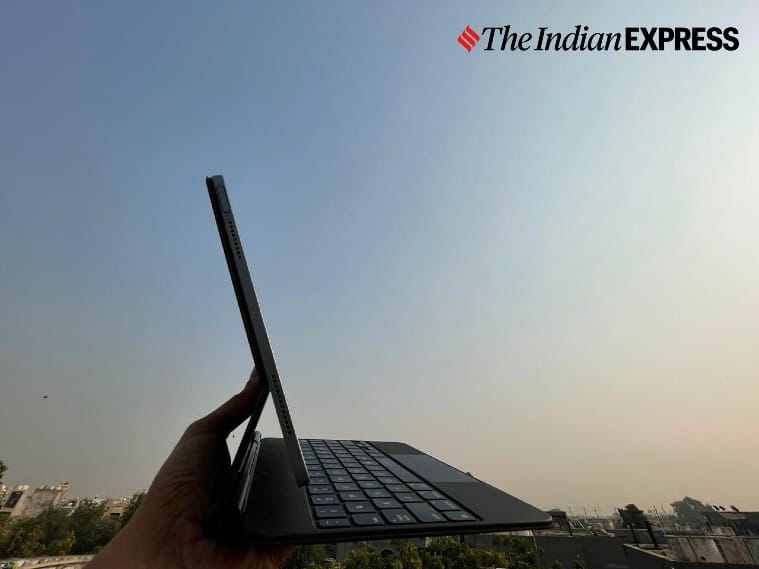 A14 Bionic is the most powerful processor Apple has ever made. (Express photo: Nandagopal Rajan)

But editing text is not what this beast is made for. In fact, this one wants you to try your hand at Adobe Photoshop and that is what I did. Add layers, import more elements or just get Photoshop to show some of its new AI driven features and the iPad Air will play along with no complaints. While I did not try my hand at it, video editing too will be a breeze on this for sure.

A lot of users will want the power to be able to game away from the small work from home breaks. And the Air will rise to that challenge too, be it a more immersive game like Hot Lava or a relaxed Butter Royale. It is hard to miss the quality of the graphics and the fact that however long your game, the iPad does not even warm up. The iPad Air will rise to that challenge too, be it a more immersive game like Hot Lava or a relaxed Butter Royale (Express photo: Nandagopal Rajan)

On a full charge, I was able to manage about two days of work which includes a lot of writing and editing, many hours of Zoom calls and browsing both websites and watching video. This is with the backlit keyboard and the Pencil yoked on and maybe you can get more without either, but what is the fun in that.

The one thing that struck me was the size of the bezels on the screen. It is a bit thicker than the iPad Pro and you have less real estate than you would expect. However, the black bands do not come in your way much. 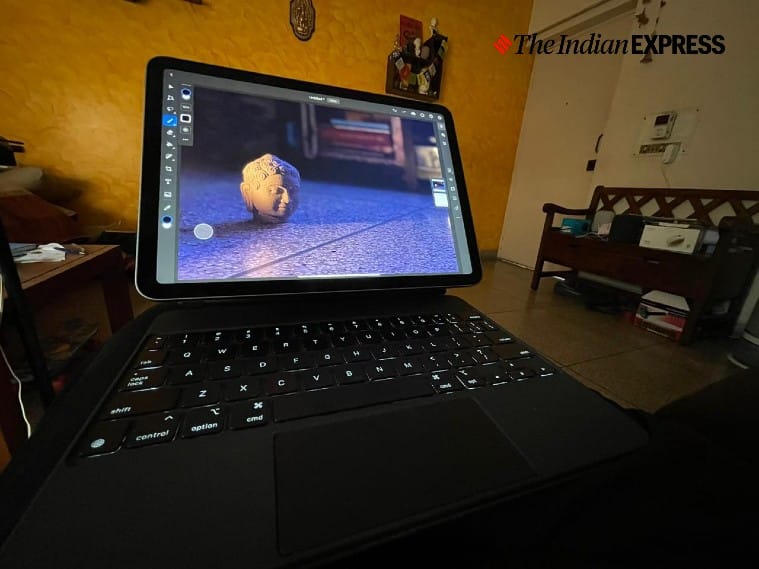 The screen is a bit thicker than the iPad Pro. (Express photo: Nandagopal Rajan)

If your reason for buying an Air in place of the Pro is to same money, be aware that the Magic Keyboard (Rs 27,900) and Apple Pencil (Rs 10,900) will take the cost of owning a top-end model to above Rs 1,00,000. The good thing is that if you already own an Apple Pencil, it will be compatible here too.

But it does become a bit confusing for a user trying to choose between the iPad Pro and the Air, and maybe it will come down to screen size to differentiate.

Yes, if you are looking for a versatile, powerful portable computing device. In fact, if you are bored of the laptop and not really tied to that form factor then maybe you should consider that iPad Air which is most probably more powerful than most laptops out there now. Here is a device you can carry to the cafe, on the plane and back to office, and still be capable of tackling anything you will encounter in these scenarios. While I said you have to be mindful of the price, the full combo is not costing you more than what similarly specced laptops. Go ahead and own this if you have been itching to upgrade your iPad, or just moving away from traditional laptops.