Amid guidelines and restrictions, makers assure no compromise of entertainment on TV shows The cast and crew on the set of Shakti. (Photo: Kamya Punjabi/Instagram)

Starting today, all general entertainment channels will start airing fresh content after almost three months. Shoots resumed a couple of weeks ago, following a long list of precautionary steps. Apart from detailed guidelines, the SOP issued by the Maharashtra government has also directed shows to avoid any scenes with crowds – market, wedding or any kind of celebration.

Now what is television without drama and celebration? If you are wondering that the new norms of shooting will affect your daily dose of entertainment, you are mistaken. The makers have assured that while they will continue to shoot amid restrictions, they will creatively enhance the entertainment quotient so that fans are not left disappointed.

TV show Taarak Mehta Ka Ooltah Chashmah, which has one of the largest ensemble cast, recently resumed shoot. The show’s creator Asit Kumarr Modi exclusively told indianexpress.com, “Shooting while maintaining all the guidelines is definitely tough. It is for every show. However, given we have a larger team, it’s slightly more difficult for us. Fortunately, we are shooting in Filmcity, which has a comparatively larger space, and we are managing quite well.”

The producer shared that while social distancing is maintained throughout the set, it is a task to do so while shooting with more than one actor in a scene. However, complete precaution is taken to assure the safety of the actors, and they are positioned one metre apart. He also shared that the creatives are playing around with the storylines and sequences so as to avoid any kind of close contact.

“We have mustered a lot of courage and returned to the sets, keeping in mind that we have to follow the social distancing norms, wear protective gear and adhere to all the guidelines. The actors are masked throughout their time on set and remove it only when the camera is about to roll. We also have a team on standby with hand sanitisers, and after every few minutes, we get the actors to use it,” he added.

A source from the industry also shared with us that the audience will not find anything different when they watch the shows. The teams have been divided into two so that there are limited number of people in a given day on the set. Preference is also given to individual and closeup shots, so the floor doesn’t have multiple people together. It’s right now the litmus test of writers and editors to create a seamless episode with the footage shot. Apart from innovative ways of writing scenes, writers are also incorporating important social messages through the show. 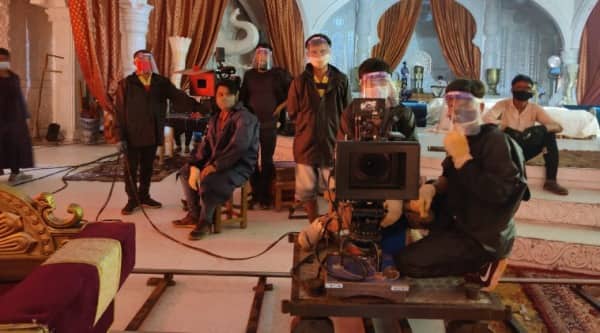 The crew on the set of RadhaKrishn. (Photo: PR Handout)

Writer Sharad Tripathi, who pens multiple serials, shared with us most channels gave the writing team a diktat to include safety messages like wearing a mask, using sanitisers in the script. The team is also avoiding any kind of outdoor scenes or ones with elderly and children involved. As of now, dupes are being used for their part, and like Bharti Achrekar (Naati Pinky Ki Love Story), they have been recording their visuals from the comfort of their home.

“There are multiple restrictions on us right now. With our hands almost tied up, we are trying our best to give the same kind of entertainment to the audience. Right now, there would be close to no scenes that involve physical contact. We are also avoiding fighting, hugging, kissing or any kind of display of affection between the actors. So instead of a hug or a slap, actors will be showing their emotions only through expressions. It is a task to be honest, but there is no other way. We want work to continue smoothly and letting these actors maintain social distance is an important part of their safety,” shared Tripathi.

Also Read | From doing makeup to taking individual breaks, TV actors get used to the new normal on sets

He also added that he and his team have been including scenes in Shakti: Astitva Ke Ehsaas Ki where the importance of wearing a mask or using a sanitiser is highlighted. “It is a challenge for us to incorporate these important messages in an entertaining way. We are assuring it’s candid and does not look too forced.”

Asit Kumarr Modi lastly spoke about how the audience’s taste might have changed during the lockdown. He said that most people got inclined towards the digital medium. However, he is quite hopeful that viewers would be excited to see their favourite shows back.

“Right now we all need positivity and happiness and Taarak Mehta will definitely bring the same to its audience. They have been waiting long to be entertained. Along with our show, I am also hopeful that our viewers would all enjoy watching their favourite serials once again,” he concluded.